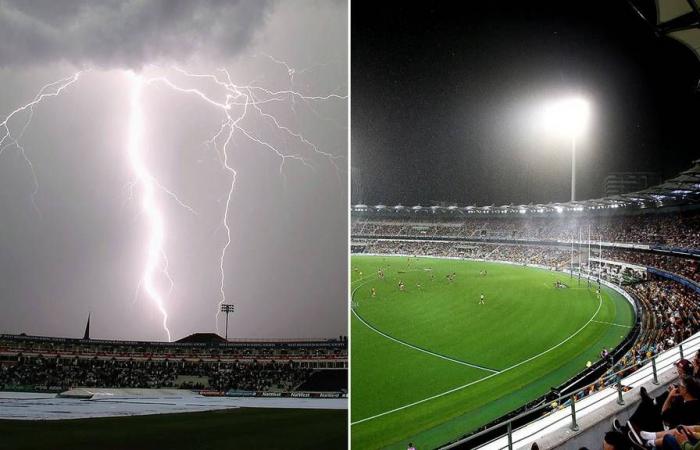 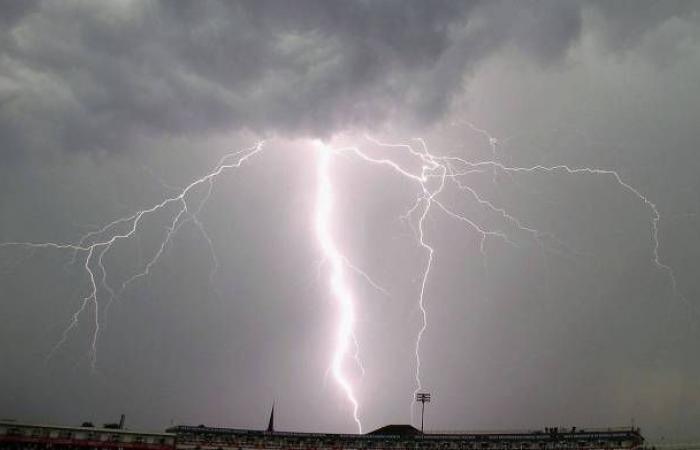 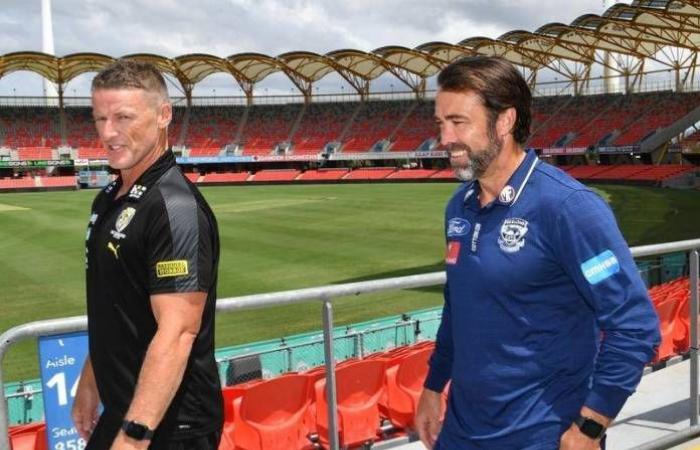 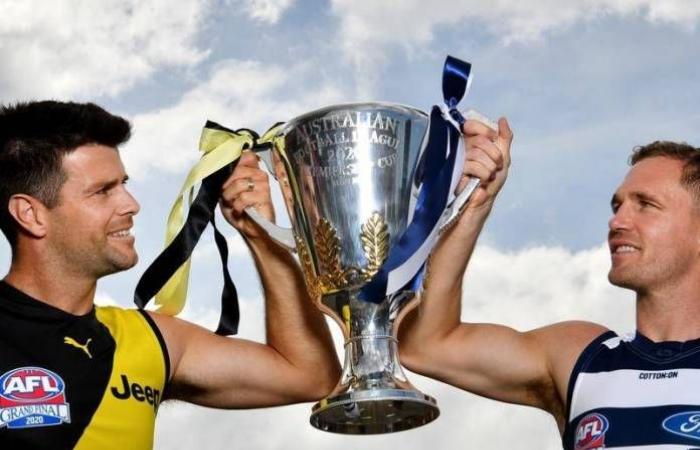 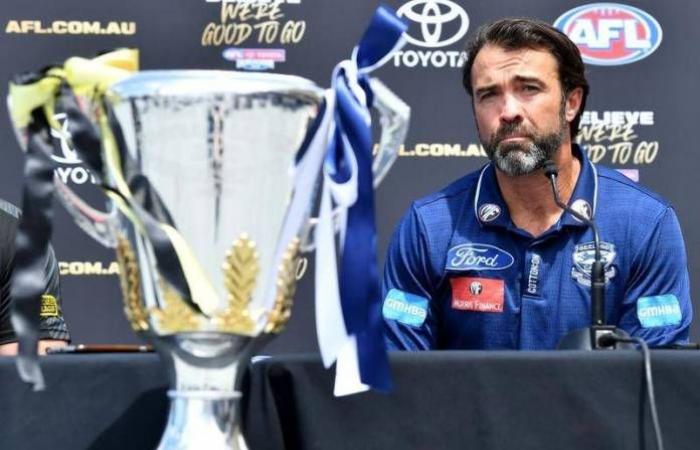 The weather forecast is due for the AFL final in Gabba – and the possibility of thunderstorms remains during the game.

This leaves the prospect that Footy’s biggest game will have to be postponed under the AFL’s extreme weather policy.

The policy states that if there is lightning within 10 km of the ground, the game should be stopped and players should go inside.

The game will only continue if there is no lightning bolt within 10 km of the ground for 30 minutes.

“According to the lightning rule, you can delay the game by up to an hour,” said an AFL spokesman.

“It has happened before, but it’s very rare.”

A spokesman for the Bureau of Meteorology told 7NEWS.com.au that lightning strikes within a 10 km radius of the gabba during the game has about a 20% chance.

“During today’s game, there is a 20% chance of lightning strikes within 10 km of the AFL’s gabba,” said a service forecaster from the bureau.

“It’s much more likely that we’ll just see showers during the game.

“There will be fast moving storms, which means the heavy showers won’t last too long during the game.

“The heaviest showers will mostly be much further inland, but there is a chance they will move east and have an impact during the game.”

The forecaster also announced that the office will communicate closely with the AFL both during the game and in advance to determine if there is lightning within 10 km of the ground.

“We supported the AFL and informed them every day about the forecast and the possibility of lighting during the game,” the forecaster told 7NEWS.com.au.

“We will also be in contact with the league in advance of and during the game to support their 10 km radius rule.”

“The (Gabba) floor looks spectacular this morning. We just got through a rain shower, ”said Stone from Brisbane.

“That’s the only thing people are watching very closely because the office is predicting some rain and maybe some storms.”

A meteorologist from the office said that while lighting is not safe, high humidity will have a big impact on competition.

“We have a 30 percent chance of seeing showers over the gabba tonight,” said Rosa Hoff.

“But what the weather will be like is damp with some showers.

“High dew point temperatures of around 19 degrees mean players feel pretty sticky, which can affect their ability to cool off and increase player fatigue.”

7NEWS ‘Tom Browne said the tigers were better suited to the conditions.

“I think the Tigers, but it’s just a tip because it has the hallmarks of a modern classic,” said Browne Sunrise.

“It’s interesting to talk about the weather, the sun has just come up and it’s obviously wet here in Brisbane this morning and that suits the tigers.”

Both Richmond and Geelong have handled the humid conditions in Queensland well this season.

But Tiger’s assistant coach Justin Leppitsch, who has spent his entire 13-year AFL career in Brisbane, believes his side could have the advantage.

“We have the feeling that we can play well in any weather,” said Leppitsch.

“That’s the nice thing about our game, it holds up in many styles. But I think the rain will no doubt help us.

“It keeps the ball on the ground and I think Geelong is a possession team.

“I think the whole foot world knows this, but I don’t think that will do the job. It won’t be enough. “

Previous AFL games postponed due to lightning included a preseason game between West Coast and Essendon in 2020 and a clash between GWS and Sydney at Spotless Stadium in 2014.

Three AFLW games were also postponed due to lightning strike.

While Brisbane weather may not be conducive to the free-flowing football game, the forecast is worse for the usual host city of Melbourne.

People in the Victorian capital looking to watch the outdoors in small groups, as recently permitted by a recent relaxation of COVID-19 restrictions, may be put off by the 100 percent chance of rain and wind.

Showers are also forecasted in Adelaide, Sydney, Canberra and Hobart.

Perth may be Australia’s best capital to watch the game in an open air location. Clear and warm conditions are expected.

The AFL mandates that the following guideline should be used to determine what action to take when lightning is present near a game.

The league says that the use of this guideline, known as the “lightning standard,” “reduces” the likelihood of injury from lightning strike.

“If there is no specific information from weather radar, a lightning detection system or a special warning device, the 30/30 safety guideline should be used.

As per the 30/30 Security Policy, the following procedures apply when lightning is deemed a possible or actual threat to an Australian football game:

(a) Observing the approach of storm clouds, the first lightning bolt, or the thunderbolt, no matter how far away, should increase lightning awareness. The risk depends on the location (direction and distance) in relation to the storm cell and the direction the storm system is moving.

(b) A simple way to determine the distance to the storm cell is to measure the time that has elapsed when the lightning bolt is observed and the associated clap of thunder can be heard.

(c) Light moves faster than sound. Assuming that the light from the flash reaches the viewer immediately and that the sound takes approximately three (3) seconds to travel one (1) kilometer, the distance can be determined using the following rule: Distance (in km) = time from watch the lightning to hear thunder (in 3 seconds)

(d) It is important to remember that lightning can be obscured by clouds. Therefore, it must be assumed that lightning is nearby when thunder is heard. In such cases it is necessary to carefully assess whether there is a threat

(e) The first part of the “30/30” rule is a guide for postponing or suspending activities. Most experts agree that the accepted “safe” distance to lightning is more than 10 km. This means that when the time interval between watching the lightning strike and hearing the thunder approaches 30 seconds, everyone in exposed areas should seek safe shelter or be already in them. A storm cell with lightning activity within 10 km poses a threat.

(f) The second part of the 30/30 rule contains the criteria for resumption of activity, which also apply to decisions with parts list access. Here it is recommended to wait at least 30 minutes after the last sight of lightning or thunder. This number is based on the observation that the typical storm moves at around 40 km / h. If you wait 30 minutes, the thunderstorm can be around 20 km away, minimizing the chance of a lightning strike nearby.

(g) It is important to emphasize that blue skies and lack of precipitation are insufficient reasons to violate the minimum 30 minute return to activity rule. “

These were the details of the news AFL Grand Final Weather Forecast Means Richmond could be postponed versus... for this day. We hope that we have succeeded by giving you the full details and information. To follow all our news, you can subscribe to the alerts system or to one of our different systems to provide you with all that is new.