Supermassive black hole in the middle of the Milky Way does... 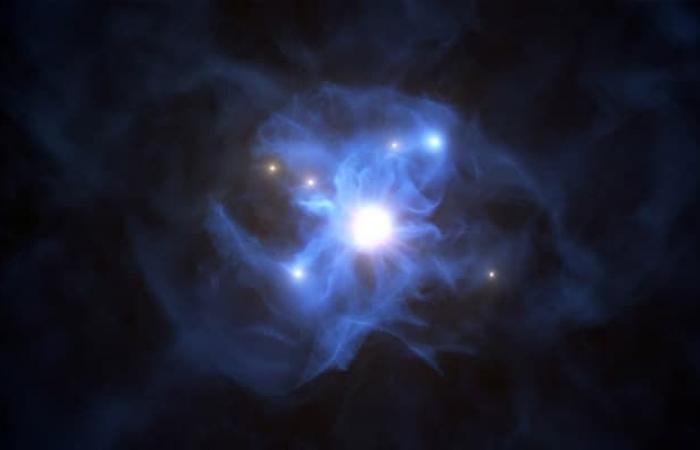 Supermassive black holes are characterized by only two numbers: mass and spin (file)

New research has shown that the supermassive black hole at the center of the Milky Way doesn’t spin much, which provides more evidence that a jet is unlikely to exist.

Research by scientists from the Harvard & Smithsonian Center for Astrophysics (CfA) and the Center for Interdisciplinary Exploration and Research in Astrophysics (CIERA) at Northwestern University have been published in the Astrophysical Journal Letters.

Supermassive black holes like Sgr A * – the monstrous black hole in the center of the Milky Way – are only characterized by two numbers: mass and spin, but they have a decisive influence on the formation and evolution of galaxies.

“Black holes release an enormous amount of energy that removes gas from galaxies and thus shapes their star formation history,” said Dr. Avi Loeb, Frank B. Baird Jr., Professor of Science at Harvard University and CfA astronomer, and co-author of the research.

While scientists know that the mass of central black holes has a critical impact on their host galaxy, measuring the effects of their spin is not easy.

“The effect of the black hole spin on the orbits of neighboring stars is subtle and difficult to measure directly,” said Loeb.

To better understand how Sgr A * influenced the formation and evolution of the Milky Way, Loeb and Dr. Giacomo Fragione from CIERA instead used the star orbits and the spatial distribution of S-stars – the closest stars, the Sgr orbiting A * and traveling at a speed of up to a few percent of the speed of light – to restrict or limit the rotation of the black hole.

The S stars appear to be divided into two preferred planes. Loeb and Fragione showed that if Sgr A * had significant spin, the preferred orbital planes of the stars at birth would be misaligned to this day.

“For our study we used the recently discovered S stars to show that the spin of the black hole Sgr A * must be less than 10 percent of its maximum value, which corresponds to a black light rotating at the speed of light in common orbital planes of these common orbital planes Stars would not stay aligned during their lifetime, as can be seen today, “said Loeb.

The results of the research also point to another important detail of Sgr A *: it is unlikely there is a jet.

“Jets are believed to be powered by spinning black holes that act as giant flywheels,” Loeb said. Fragione added, “Indeed there is no evidence of jet activity in Sgr A *. Upcoming analysis of data from the Event Horizon Telescope will shed more light on this topic. ”

The find was published just days before the announcement of the 2020 Nobel Prize in Physics, which was awarded in part to scientists Reinhard Genzel and Andrea Ghez for their groundbreaking research that showed Sgr A * is a black hole.

“Genzel and Ghez monitored the movement of the stars around them,” said Loeb. “You measured its mass, but not its spin. We derived the first narrow limit for the spin of Sgr A *, ”adding that the find would not be possible without Genzel and Ghez’s original Nobel Prize work.

(Except for the headline, this story was not edited by NDTV staff and published from a syndicated feed.)

These were the details of the news Supermassive black hole in the middle of the Milky Way does... for this day. We hope that we have succeeded by giving you the full details and information. To follow all our news, you can subscribe to the alerts system or to one of our different systems to provide you with all that is new.