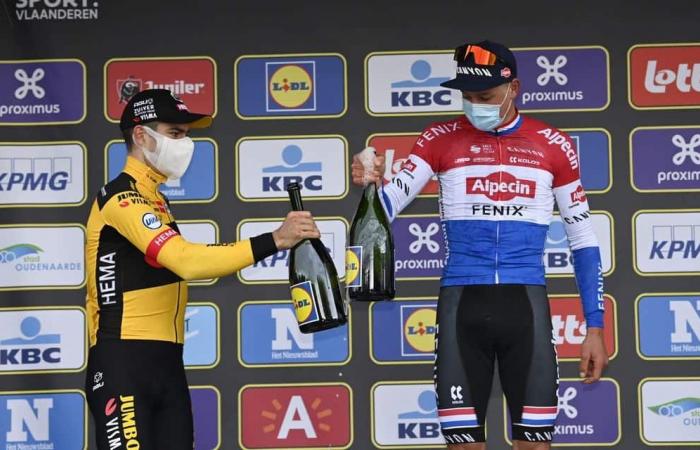 Mathieu Van der Poel and Wout Van Aert did not emerge as Gand-Wevelgem’s best friends last Sunday. The Belgian had criticized the Dutch for driving to make him lose and not to try to win. A statement that had not pleased Raymond Poulidor’s grandson who had defended himself from running against his great rival.

But this little post-race controversy had been amplified by the media, especially in the north of the country, to increase the pressure in the week before the Tour of Flanders. The two protagonists returned to this incident but trying to calm things down: “I was thinking what I said but I should have kept it to myself”, had confessed Van Aert while Van der Poel claimed for his part that this affair “hadn’t kept him from sleeping. Sunday night the case was closed.”

In the end, the two great opponents for years in cyclo-cross and now on the road, won the sprint on the Ronde. A victory went to Mathieu Van der Poel. But after crossing the line, the two gave a nice hug.

What to silence those who seek controversy

These were the details of the news When Wout Van Aert and Mathieu Van der Poel put an... for this day. We hope that we have succeeded by giving you the full details and information. To follow all our news, you can subscribe to the alerts system or to one of our different systems to provide you with all that is new.