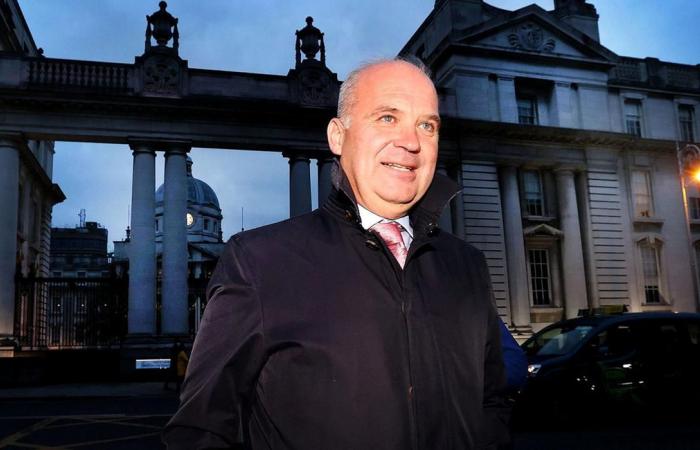 The government is expected to escalate its response to the Covid-19 surge and roll out a mix of Level 4 and 5 this week. But there was no major announcement from the coalition last night after a meeting of party leaders and senior ministers concluded that decisions are not expected until tomorrow, when the entire cabinet meets.

Transport minister and chairman of the Greens Eamon Ryan said last night the various effects of escalating restrictions need to be considered, including those on employment and people’s mental health. He said the number of hospitalizations and intensive care units is increasing, but not in a way that it is inappropriate to “take a day or two to think about action”.

Yesterday, high-ranking coalition members were briefed on the enormous societal costs of Level 5, including 120,000 laid-off people and businesses that failed to recover from an extended shutdown for the second time this year.

In addition, a government source announced that the state would put level 4 or 5 restrictions under the new Covid Restrictions Support Scheme, which will give weekly grants of up to € 5,000 each to companies forced to close.

Details of the EUR 260 million cost of helping businesses and workers if the restrictions escalate. The Sunday Independent believes that “a more recent” definition of “designated worker” and “essential service” needs to be considered before any new action is taken.

For example, essential services for level 4 contain 18 categories including “construction and development workers”, but construction site workers are not considered essential under level 5.

However, it is understood that the Minister for Housing, Darragh O’Brien, has advised the construction sector that it is an essential level 4 and 5 service.

There are also some issues that need to be resolved related to employment assistance. The wage subsidy scheme announced in July was intended for employers who reopened after the first freeze, not a second freeze. “It’s complicated,” a government source said last night, adding, “There is general agreement that we need to escalate our response.”

Other issues being examined by ministers this weekend are measures aimed at combating house parties, but not giving gardaí the power to enter people’s homes. Justice Secretary Helen McEntee will make proposals to the cabinet on Tuesday.

It is also intended to continue to consult with the Northern Irish authorities regarding the restriction measures implemented there.

The spread of Covid is widely believed to have spilled over to three border districts – Cavan, Donegal and Monaghan – which are already level 4 restrictions.

There was a Q&A between the six cabinet members and Dr. Holohan and officials, including HSE chief Paul Reid, who shared his concerns with the government that non-covid care will be affected by spikes in hospital and intensive care admissions as a result of the virus. Mr. Reid’s views on the health care system’s ability to cope in the coming weeks will be crucial in the final decision.

There was growing opposition from coalition ministers and TDs to moving to level 5, with some cabinet ministers privately saying the entire state should move to level 4 instead. However, the “alarming development” and the rapidly increasing number of cases could force the coalition to fully implement public health recommendations, admitted a high-level government source.

In private, some cabinet members oppose a move to level 5, while others believe “somewhere between level 4 and 5″ is likely.

Ministers are also angry with Nphet, accusing the group of giving twice leaky advice on the lockdown before the government could consider it in the past few weeks and that they failed to provide guidelines for success and therefore easing restrictions allow.

In other countries there are numerical targets that dictate what restrictions are imposed.

For example, Germany agreed last week to restrict private gatherings and to curfew at 11 p.m. on bars and restaurants in areas where the weekly rate is more than 35 new cases per 100,000 people. As soon as the threshold of 50 new cases per 100,000 is exceeded, stricter measures will be imposed in the country’s 16 federal states.

A cabinet minister said: “Five are very serious economically. I wouldn’t go to five. People need a little riot. Home calls had to be addressed, and if that is done it should make a difference. We’re going to have to make sure the drug doesn’t kill the patient. ”

Their views were confirmed publicly and privately by various ministers and TDs yesterday. Fianna Fáil Junior Health Minister Anne Rabbitte signaled her opposition to escalating restrictions at the time. “We get the best public health advice from Nphet and have always followed it. But I think we need time for the current levels to work where we have level 3 for most of the country. ”

In Fine Gael, former Housing Secretary Eoghan Murphy is one of a number of senior TDs opposed to another lockdown.

“With every new day of constraints, this economic situation becomes more precarious for all of us and more permanent damage is done to our economy. I’m not heartless about Covid or the tough times people are going through … but we need to think about the non-Covid health damage that is being done to our society and damage to jobs in our economy, “Murphy said last week.

“We are certainly on our way to higher restrictions, possibly level 5. The situation is very serious and Sinn Féin will support the necessary measures to save lives and protect public health,” she told the Sunday Independent.

These were the details of the news Coronavirus Ireland: Mixture of Level 4 and 5 Covid restrictions expected... for this day. We hope that we have succeeded by giving you the full details and information. To follow all our news, you can subscribe to the alerts system or to one of our different systems to provide you with all that is new.