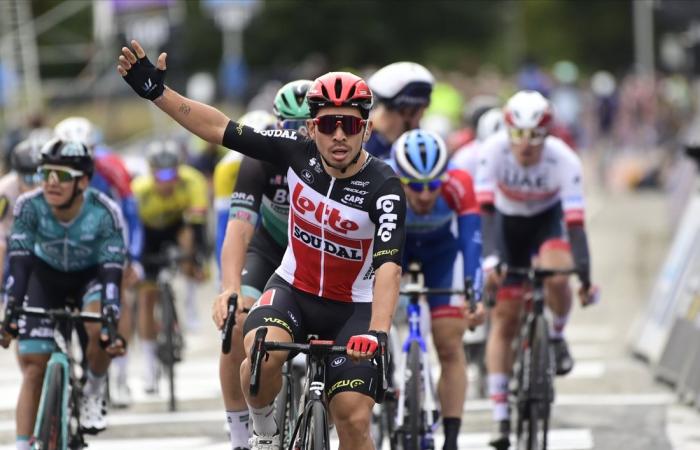 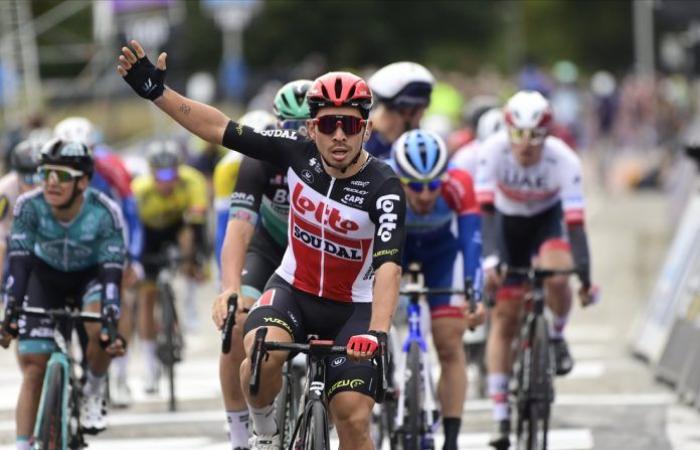 Caleb Ewan has won the Scheldeprijs. The Lotto-Soudal sprinter was the fastest of the pack on Churchilllaan in Schoten. The sprint was – not for the first time in the Scheldeprijs – marred by a fall. August Jensen was the biggest victim, Ackermann was the culprit and was declassified.

How did victory come about?

Ten laps of 17.3 kilometers in and around Schoten, that was on the program. Nobody doubted that we would see a sprint on Churchilllaan, the changed course did not change that. Nathan Van Hooydonck (CCC Team) and Elmar Reinders (Riwal – Securitas Cycling Team) were the first to try to get away, but in the end it was a group of eight riders who would form the good flight: Christopher Juul-Jensen (Mitchelton – Scott ), Piotr Havik (Riwal – Securitas Cycling Team), Travis McCabe (Israel Start-Up Nation), Dmitriy Gruzdev (Astana Pro Team), Luc Wirtgen (Bingoal – WB), Michael Schär (CCC Team) and Lewis Askey (Groupama- FDJ) and actually three-time winner Mark Cavendish (Bahrain – McLaren), who sent an emotional message to the world beforehand: ‘I don’t want to stop racing, I love the sport so much.’

In the peloton, shadow favorite Cees Bol (Team Sunweb) with Casper Pedersen and Alberto Dainese saw two pawns drop out early due to falls. Ex-world champion Mads Pedersen, who was still the best in Gent-Wevelgem on Sunday, also left the race early with the Tour of Flanders in mind.

The nine leaders would never get more than a minute and a half from the sprinter teams, who kept everything under tight control. At 21 miles from the finish, Cavendish saw the hopelessness of the undertaking, and the Briton willingly let himself down. We were left with seven leaders, but they saw how the peloton was approaching to within half a minute. For Piotr Havik it went too slow and at the start of the last lap he went solo. Against better judgment, at 8 kilometers from the finish, his song was also over.

Under the command of Deceuninck – Quick-Step in particular, the peloton headed for the finish line at a rapid pace. A traditional run-up to the sprint, with the various trains fighting for the best places. Ewan, Bennett and co were piloted to Churchilllaan. There Caleb Ewan showed convincingly fastest, ahead of Ackermann and Bonifazio. Sam Bennett became trapped and played no part. The sprint was marred by a serious crash by someone from Riwal – Securitas Cycling Team (August Jensen?), Who saw his front wheel mowed away by a maneuver by Ackermann. Ivan Garcia Cortina (Bahrain-Mclaren) was also introduced to the asphalt in Schoten. Ackermann was downgraded, Bonifazio was second and Coquard third.

What did the Belgians do?

Going along, but that also said everything. Philipsen saw his hole being closed by Bonifazio and made an appearance, Merlier was also not satisfied with the progress of the sprint. He, in turn, seemed to be angry with Philipsen, who on two occasions gave the door a little for his future teammate.

Anything else you should know?

Jasper Philipsen rode his last race of the season on Belgian soil today. The 22-year-old Belgian will close his season with the Vuelta. The next time we see Philipsen at the start of a race in Belgium, it will be in the Alpecin-Fenix ​​shirt.

*The article has been translated based on the content of Source link by https://www.standaard.be/cnt/dmf20201014_95470931
. If there is any problem regarding the content, copyright, please leave a report below the article. We will try to process as quickly as possible to protect the rights of the author. Thank you very much!

These were the details of the news Caleb Ewan confidently sprints to victory, the crash disfigures … for this day. We hope that we have succeeded by giving you the full details and information. To follow all our news, you can subscribe to the alerts system or to one of our different systems to provide you with all that is new.