A possible negative side of intermittent fasting 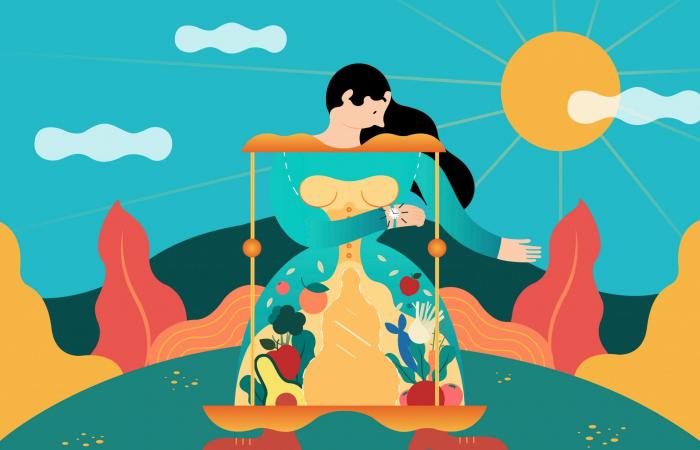 Intermittent fasting is a fashionable strategy for losing weight. But a new study found that a popular form of intermittent fasting, called a time-restricted diet, produced minimal weight loss and a potential disadvantage: muscle loss.

​> Learn how to receive news from NSC Total on WhatsApp​

The new research, published in “JAMA Internal Medicine”, is one of the most rigorous studies to examine time-restricted eating, which involves fasting 12 or more hours a day. Many of the regime’s followers, who became popular in diet books and praised by celebrities, often skip breakfast and eat all meals between noon and eight at night, resulting in a 16-hour daily fast.

​> Discover the benefits of vitamin D for muscle and bone health​

Research over the years has suggested that the practice encourages weight loss and improves metabolic health, although much of the data came from experiments on animals or small studies of relatively short duration with humans. Experts say the diet works because it gives people the freedom to eat whatever they want, as long as they do it within a narrow window of time, which leads them to consume fewer calories overall.

The new research, however, revealed that overweight adults who were assigned to fast routinely for 16 hours a day, eating all meals between noon and eight at night, popularly known as the 16: 8 diet, had almost no no benefit from that. Over the three-month study, they lost an average of just one to a pound and a half – just a little more than the control group – and most of the weight they lost was not body fat, but “lean mass” , which includes muscle.

Although it is normal to lose some muscle mass when losing weight, the fasting group lost more than expected. This is worrying because the muscle offers many health benefits: it protects against falls and the development of physical disabilities related to aging, and is related to lower mortality. It also increases metabolism and can help prevent the weight lost during the diet from returning later. The researchers speculated that one of the reasons for the muscle loss may have been that the fasting diet led people to consume less protein.

The new findings were surprising to the study’s lead author, Dr. Ethan Weiss, cardiologist at the University of California, San Francisco. Weiss had been practicing time-restricted eating since 2014, eating all meals between noon and eight at night. However, when he analyzed the data and saw the results of his study, he interrupted his daily fast and went back to breakfast. “I thought it worked and I did it myself, so I was surprised by the results,” he said.

But some experts warned that the study was too short for a weight loss experiment. They reported that it was very likely that the fasting group would have lost more weight if the study was longer and included more participants. They also emphasized that previous research has shown that people perform best when they consume most of their calories relatively early in the day, which is when our bodies are able to better metabolize food, instead of skipping breakfast and eating most of it. food in the afternoon and evening, which goes against our biological clock.

Studies have found, for example, that overweight adults lose more weight and show more improvements in cardiovascular risk factors when they eat a large breakfast, a modest lunch and a light dinner, compared to when they eat a small breakfast and a great dinner.

​> A diet free of animal products, at least for a month​

“It may be that the benefits of time-restricted eating are less than we thought, or that the best results will only appear when eating early in the day. The jury is still absent,” noted Courtney Peterson, a researcher at the University of Alabama in Birmingham, who studies intermittent fasting and who did not participate in the new study.

Many cultures around the world practice fasting for religious or spiritual reasons. But fasting became popular for health reasons after small studies suggested that it promoted longevity and a wide range of metabolic benefits, such as improved cholesterol levels and reduced insulin resistance. Some of the other common intermittent fasting options are fasting on alternate days, in which the person eats no more than 500 calories on alternate days, and the 5: 2 diet, which involves eating normally for five days a week and fasting for two .

Many people, however, find it difficult to spend an entire day eating little or no food. Krista Varady, professor of nutrition at the University of Illinois at Chicago, found in her research that people lose weight more slowly with time-restricted eating than with other forms of fasting, but that this is usually the easiest form of fasting to adopt. People tend to eat 300 to 500 fewer calories a day when restricted to an eight-hour window, said Varady, who was not involved in the new survey. “The best part is that there are no limitations during the window. There are no carbohydrate or calorie counts, and people don’t have to change all the food in the pantry.”

Varady said he was planning to start a year-long study on time-restricted eating in the near future. “I find it fascinating that this diet has become so popular and yet there is so little study,” he said.

Weiss became interested in time-restricted eating after reading research that showed that mice that had uninterrupted access to foods high in fat and sugar made them fat and sick, while those that ate the same foods in an eight-hour window were protected against obesity and metabolic diseases. The doctor noted that it was not very difficult for him to skip breakfast and eat between noon and eight at night.

​> The power of happiness​

He wanted to see if the diet could be a simple prescription for people to lose weight; therefore, for the current study, he and a colleague, Dylan Lowe, designed an experiment: they recruited 116 overweight and obese adults and divided them into groups. One group, which served as a control, was instructed to eat three structured meals a day. The other group was assigned to eat only between noon and eight at night, drinking only non-calorie drinks, such as tea and coffee, outside that window.

The researchers decided that it would be socially more acceptable for participants to skip a meal in the morning than in the evening, when they could have dinner with family or friends.

The researchers gave the participants a digital scale and monitored their weight for 12 weeks. They also had 50 participants, from both groups, come to their laboratory four times during the study so that they could measure fat and muscle mass indexes, blood sugar level and energy expenditure.

​> 10 apps to take care of physical and mental health​

The fasting group lost an average of 900 grams, just 200 grams more than the control group. When the researchers examined the participants who had visited the laboratory for testing, they found that the fasting group had little or no improvement in most metabolic markers, although it tended to lose more weight, just over a pound and a half. That was about a pound and a hundred grams more than the control group, a statistically significant difference. But 65 percent of the weight that the fasting group lost was lean mass – more than double what is considered normal when losing weight.

Weiss said it was possible that the fasting group had lost an unusual amount of muscle because skipping breakfast every day caused the overall protein intake to plummet. But that could be avoided: other studies have found that, while fasting, people can maintain their muscles by doing resistance exercises and consuming more protein during the feeding window. The researcher commented that the findings need to be explored further, but that he remains skeptical about time-restricted eating. “This was a short study, but enough to make me wonder if it worked – and if it works, the magnitude of the benefit is very small.”

These were the details of the news A possible negative side of intermittent fasting for this day. We hope that we have succeeded by giving you the full details and information. To follow all our news, you can subscribe to the alerts system or to one of our different systems to provide you with all that is new.