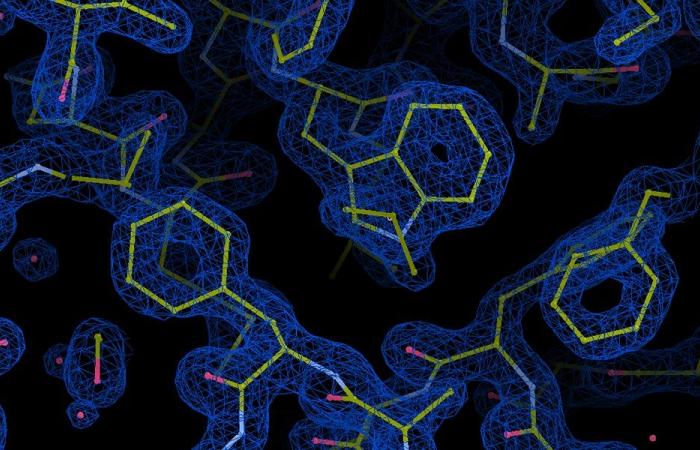 Molecular structure of the essential light chain protein in the Plasmodium glideosome. The blue “clouds” represent the electron density of the protein, with bonds between atoms in yellow and water molecules in red. The crystal structure phased by sulfur-SAD at 1.5 Å was obtained using the Petra III beamline at EMBL Hamburg. Photo credit: Samuel Pazicky / EMBL

In biological terms, sliding refers to the type of motion during which a cell moves along a surface without changing its shape. This form of movement is unique to parasites from the Apicomplexa strain such as Plasmodium and Toxoplasma. Both parasites, transmitted by mosquitoes and cats, have a huge impact on global health. Plasmodium causes 228 million malaria infections and around 400,000 deaths each year. Toxoplasma, which infects even a third of the human population, can cause severe symptoms in some people and is particularly dangerous during pregnancy.

By sliding, the Apicomplexa parasites can enter host cells and move between them. For example, when plasmodium enters the human body through a mosquito bite, it slides through human skin before it enters human blood vessels. This type of movement relies on actin and myosin, which are the same proteins that enable muscle movement in humans and other vertebrates. Myosin has a form of molecular “legs” that “march” along the actin filaments, creating movement.

In Apicomplexa, myosin interacts with several other proteins that together form a complex called a glideosome. The exact mechanism by which the glideosome works is not known precisely because the molecular structure of most glideosome proteins is unknown. Understanding this mechanism could, however, help the development of drugs that prevent the glideosome from building up and thereby stop the progression of diseases such as malaria and toxoplasmosis.

Scientists at EMBL Hamburg analyzed the molecular structure of essential light chains (ELCs), which are glideosomic proteins that bind directly to myosin. They are known to be necessary for sliding, but their exact structure and role were previously unknown. The researchers now obtained molecular structures of the ELC bound to myosin A in Toxoplasma gondii and Plasmodium falciparum with the help of X-ray crystallography and nuclear magnetic resonance (NMR).

Their study, published in Communication Biologyshows that ELCs work like “molecular stilts” – when myosin A binds, the ELCs become rigid and begin to act as a lever arm. This stiffening causes myosin to take longer strides, which is likely to speed up the parasite’s sliding movements.

The researchers also examined the role of calcium, a suspected glide regulator, in the interaction between ELCs and myosin A. Surprisingly, they found that calcium does not affect the structure of ELCs. However, it does increase the stability of the ELC-myosin A complex. This unexpected result shows that the glideosome architecture still hides many unknowns.

“This work provided the first glimpse into the movement of these organisms,” says Matthew Bowler, an EMBL Grenoble researcher who was not part of the study and who is investigating Toxoplasma’s strategies for controlling the immune system after it has entered cells.

“It is fascinating to see how new molecular details arise about how these parasites work outside the host cell. The beautiful structures show how the motor that drives this movement is put together and could form a basis for the development of new drugs to treat these diseases, ”continues Bowler.

Maria Bernabeu, who leads research on vascular dysfunction in cerebral malaria at the EMBL site in Barcelona, ​​adds: “The passage of Plasmodium through the skin is the first stage of infection in humans. The advantage of fighting Plasmodium at this stage is that there are only about a hundred parasites present. Understanding the parasite’s sliding motility could help develop drugs or vaccines that target Plasmodium before it reproduces. ”

The work is the result of an interdisciplinary collaboration between structural biologists (Löw group) and parasitologists (Gilberger group) from the European Laboratory for Molecular Biology in Hamburg and the Center for Structural Systems Biology (CSSB) as well as scientists from the Bernhard Nocht Institute for Tropical Medicine, University of Hamburg and Martin Luther University Halle-Wittenberg. It shows the potential of interdisciplinary cooperation to contribute to our understanding of biological processes and possible future strategies for combating parasitic diseases.

“Getting into malaria research was an exciting undertaking. The regular exchange with experts and the interdisciplinary environment helped us to explore the field of parasitology, ”says Christian Löw.

The EMBL is dedicated to the further development of interdisciplinary infection biological research. This is reflected in projects at various EMBL locations, including work on malaria by Maria Bernabeu and on Toxoplasma by Matthew Bowler as well as joint projects such as malaria or tuberculosis under the direction of Matthias Wilmanns at EMBL Hamburg.

These were the details of the news How deadly parasites “slide” to invade human cells for this day. We hope that we have succeeded by giving you the full details and information. To follow all our news, you can subscribe to the alerts system or to one of our different systems to provide you with all that is new.