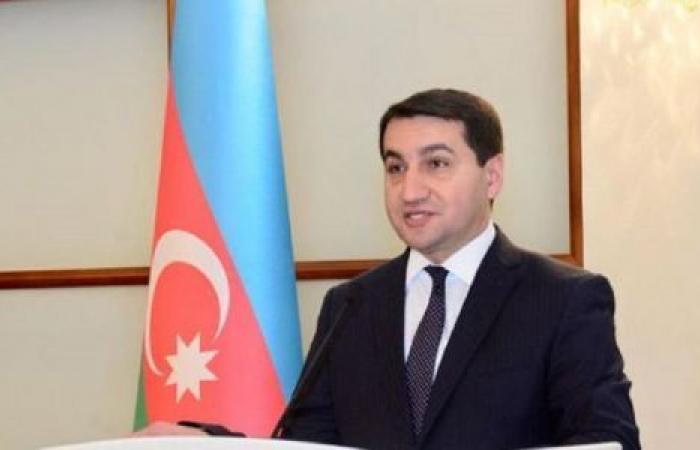 Barely a few hours passed after Russia announced an agreement cease-fire In the territory Karabakh Disputed between Armenia AndAzerbaijan, Until she charged the latter Armenia Violently cease-fireAccording to observers, this threatens to escalate fighting again.

And earlier, on Saturday, the Russian Foreign Minister announced Sergey Lavrov, Reach an agreement cease-fire in a Karabakh, Starting at noon today.

Lavrov added in a statement that “an announcement cease-fire It will take effect from 12:00 today, Saturday 10 October, for humanitarian purposes, and for the exchange of prisoners of war, detainees and dead bodies through the International Committee of the Red Cross.

except if Hikmat HajiyevAdvisor to the President, L.Azerbaijanي Ilham AliyevHe said this evening that Armenia Bcease-fire The temporary, which began hours ago, indicates the hypocrisy of its policies“.

This came during a joint press conference with the Foreign Minister Jihon BayramovSaturday, during which he touched Altruce Temporary humanity between Azerbaijan AndArmenia Which started with Russian mediation.

“Armenia She did not adhere tocease-fire This clearly shows that they are pursuing a policy based on hypocrisy“, Stressing that his country’s military successes have moved to the diplomatic arena, and that Armenia “You can no longer set conditions.”

The Azerbaijani official stressed that: “Peace can not be achieved in the southern Caucasus unless the Armenian army leaves the lands.AzerbaijanYeh“.

Moscow had announced the arrival of thetruce Humanity after a tripartite meeting held on Friday between foreign ministers Azerbaijan AndArmenia And Russia took more than 10 hours in the Russian capital, Moscow.

Observers say there are no guarantees that the deal will be implemented cease-fire in a KarabakhIn this chronic intractable conflict with overlapping sides.

While others say that the Russian weight in this issue is a major guarantee, as well as the Russian President Vladimir Putin’s invitation to the Armenian and Azerbaijani foreign ministers was a direct intervention to try to influence, and this is therefore a fundamental guarantee.

Are enjoying Armenia With Russian support, observers say the current situation in Karabakh (Occupying the territory before ArmeniaSatisfies Russia’s interests seeking to consolidate its influence in the former Soviet republics.

Moscow is militarily allied with Armenia It has a military base, but it supplies both parties (Armenia andAzerbaijan) With billions of dollars in weapons.

In a related context, Hajiyev discussed during the press conference the opportunities for Turkey’s participation in the solution path, noting that Ankara is participating as a member of the Minsk Group of the Organization for Security and Cooperation in Europe..

He explained that what is happening in the region greatly worries the Turkish side, which continues its efforts to bring about sustainable peace in the region.

He said that his country is looking forward to an active Turkish participation in the track as one of the leading countries in the region, whether in the framework of Minsk or other supportive tracks, expressing his confidence that “Turkey will make the necessary contribution in this regard.”

Since the outbreak of the new conflict, Turkey has declared its unconditional support forAzerbaijanAmid her accusations before Armenia Supplying Azerbaijan With various military capabilities, and even spreading Turkish military drone technology in the region, and transferring Syrian mercenaries to it.

Traditionally, Turkey has provided diplomatic and moral support toAzerbaijan Its geostrategic partner, and it is ethnically similar in that its population is of the Turkish element.

For his part, said the Foreign Minister of Azerbaijan Jihon BayramovThe risk of resuming military operations always exists if you do not return Armenia In a serious way, the negotiations refrained from taking real steps.

He pointed out that the main goal of thtruce The temporary is the withdrawal of bodies from the battlefield and the exchange of prisoners between the two parties under the coordination of the International Red Cross.

And he stressed that the victories achieved Azerbaijan On the battlefield he also contributed to its success in the diplomatic arena, noting that “the period cease-fire It has not been determined and will be related to the actions that will be carried out in coordination with the International Red Cross. “

Since late last month, the army launched theAzerbaijanIn a military operation Karabakh In response to what it said was an attack by the Armenian army on civilian populated areas.

Azerbaijan says that its army managed during the battles that lasted 13 days (until the entry of thetruce Today, Saturday will come into effect) from the liberation of the city of Gabriel, the town of Hadrut, and more than 30 villages in the region from the Armenian occupation.

AndKarabakh Mountain territory subordinate toAzerbaijan Under international law, however, it is inhabited and governed by ethnic Armenians.

The conflict had erupted in Karabakh in February 1988, at which time the region was declared autonomous and separated from a republic Azerbaijan Soviet socialism.

And lost Azerbaijan During the armed confrontations that extended between 1992 and 1994, its control of the region and seven other adjacent areas, and the battles resulted in the displacement of hundreds of thousands of Azerbaijanis from their homes in these areas..

The negotiations that have been taking place since 1992 within the OSCE Minsk Group, headed by three co-chairs – Russia, the United States and France, were unable to reach a peaceful settlement of this conflict.

These were the details of the news Azerbaijan accuses .. Has Armenia violated the Karabakh armistice? for this day. We hope that we have succeeded by giving you the full details and information. To follow all our news, you can subscribe to the alerts system or to one of our different systems to provide you with all that is new.