A Russian position exonerates Turkey from Azerbaijan, and Armenia is ready... 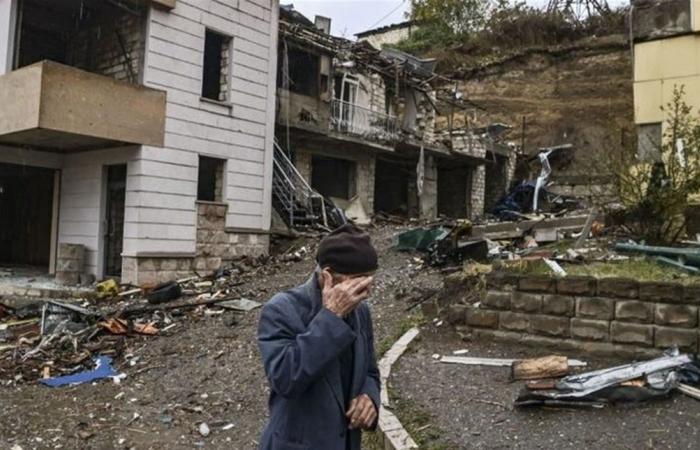 Azerbaijan announced on Tuesday that it had thwarted an Armenian army attack on an oil pipeline linking its territory with Georgia and Turkey.In the details, the Azerbaijani Public Prosecution issued a statement saying that the Armenian army fired a shell on the “Baku-Tbilisi-Ceyhan-BT-G” pipeline in the section passing through the city of “Yulakh”, but the Azerbaijani army managed to repel the attack.

The statement added that this pipeline is a huge strategic project of great importance for European energy security, describing the Armenian army’s attack as a “terrorist operation.”Heavy move to Turkey
In turn, Armenian Prime Minister Nikol Pashinyan said Tuesday in an interview with Agence France-Presse that the renewed fighting in the Nagorno Karabakh region was caused by Turkish support for Azerbaijan, denouncing what he considered as a “terrorist war against a people fighting for their freedom.”

Pashinyan, 45, said at the government palace in Yerevan, “Had it not been for the massive action of Turkey, this war would not have started. If it is true that the Azerbaijani authorities have adopted a large number of war rhetoric in the last 15 years, then the decision to start the war is due to Turkey’s full support.”He added, “It is not just a new escalation in Nagorno Karabakh, it is a process marked by the massive movement of terrorist groups from the Middle East in the conflict zone,” which means that the war has become an “anti-terror operation.”

Pashinyan believed that his country was the “last barrier” to what he called “Turkish expansion”, and said, “If Europe is unable to name this situation in his name, then it has no choice but to wait for Turkey near Vienna,” referring to the Ottoman Empire’s control of the Austrian capital in the 17th century. .

Pashinyan expressed his confidence that Russia will extend a helping hand to Armenia if it comes under direct attack inside its territory, in compliance with the existing military alliance between the two countries under a treaty. Pashinyan said that his country is ready to make concessions in its dispute with Azerbaijan over Nagorno Karabakh, provided that Baku has a similar intention.

“The disputes should be resolved based on mutual concessions,” Pashinyan said, adding that “Nagorno Karabakh is ready and Armenia is ready to make concessions in exchange for those which Azerbaijan is ready to offer.”
These are the reasons why Russia has not responded to Armenia’s support
Former Russian Deputy Foreign Minister Andrei Fedrov emphasized that despite the existence of an agreement for military cooperation between Russia and Armenia, Moscow cannot intervene militarily to support its ally Armenia in its war with Azerbaijan.

Fedrov explained that the agreement concluded between the two countries allows Moscow to intervene militarily, in the event that the territories of Armenia are subjected to external aggression, which does not apply to the current reality of the ongoing war on the territory of the Nagorno Karabakh region, which is not considered Armenian territory.
The former Russian official also confirmed that all the information that Moscow has confirms that Turkey has not yet intervened militarily in the raging war between the two neighbors Armenia and Azerbaijan, and that all its support for Azerbaijan was limited to political and diplomatic support only.

According to Fedrov, Russia does not prefer to intervene militarily in this conflict, because “it will complicate the situation,” and it will also cause problems for it with other countries.

Fedrov denied that Russia’s economic interests, its fear of losing arms deals with Azerbaijan, or its anger at the current leadership of Armenia, which Moscow accuses of being more pro-Western. The reason for not interfering with Russia so far in the war, indicating that on the social level, the Russians are supportive of Armenia and sympathize with it, and not with Azerbaijan.

As for the Turkish writer and political analyst Ismail Kaya, he ruled out that Moscow would be dragged into the ongoing war between the two countries, stressing that the situation is different from what happened in Syria, as Russia sent its forces at the request of the Syrian President whose battles are taking place on his country’s land, which does not apply to the battlefield between Azerbaijan and Armenia, as the Karabakh region is not an Armenian land, it is an Azeri land. Kaya also stressed that Azerbaijan does not need to summon the Turkish forces, as its military capabilities exceed the Armenian capabilities many times, which he accused of bringing mercenaries from all over the world.

Future scenarios
The military and strategic expert, Maan Abu Nawar, confirmed that he does not see any near solution on the horizon, given that the two parties to the conflict adhere to their positions, but he indicated Azerbaijan’s military superiority, which enables it after a period of battles to change the reality on the ground in its favor, and then force Armenia to sit At the negotiating table.

As for Kaya, he stressed that Azerbaijan and Turkey will not accept the calls of the international community for an immediate cease-fire, without the issue being resolved, stressing that the international community has not been able in 28 years to resolve the issue of Armenia’s occupation of the Azerbaijani Karabakh region, and that it is satisfied with making this issue in a state of stagnation. Throughout these years, which will not be accepted by Azerbaijan again, it has stirred stagnant waters and wants to resolve this issue.

As for Fedorov, he believed that accepting a ceasefire is the safest way to solve this issue, and after that the two sides go to negotiations to solve their dispute politically.

The ongoing battles in Karabakh for 10 days have left at least 286 people dead, according to partial numbers, and both sides of the conflict confirm that the other has suffered heavy losses of lives and equipment, and accuse each other of targeting civilian areas.

Earlier, Russia, the United States and France called for an “unconditional” ceasefire, a call repeated Tuesday by Britain and Canada, which showed grave concern about the bombing of residential areas.

These were the details of the news A Russian position exonerates Turkey from Azerbaijan, and Armenia is ready... for this day. We hope that we have succeeded by giving you the full details and information. To follow all our news, you can subscribe to the alerts system or to one of our different systems to provide you with all that is new.