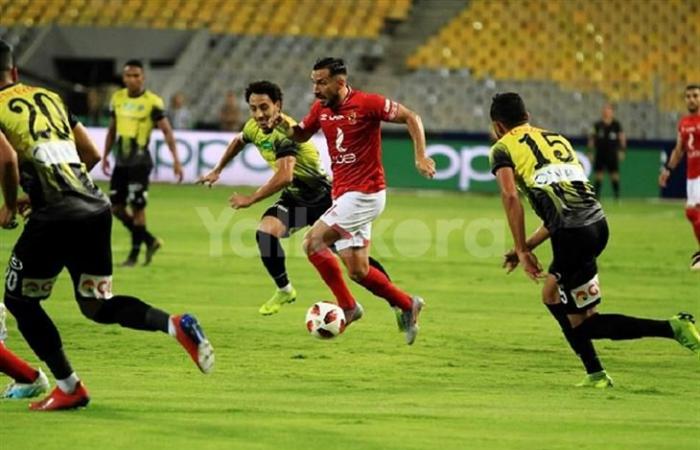 Al-Ahly club will play today’s match, Sunday, against the Arab Contractors in the 31st round of the Egyptian We League, at Cairo International Stadium.

Al-Ahly enters the meeting, seated at the top and crowned the title with 79 points, while the Arab Contractors is ranked fourth with 52 points.

Al-Ahly is in the meeting under the leadership of South Africas new coach, Pitso Mosimane, after the team’s trip ended with Rene Fyler, who left after the Arsenal match in the Egypt Cup.

Al-Ahly enters the meeting numerically incomplete from several players, especially in the defensive core, which prompted Musimani to summon only five players on the defensive line, including four from the backs of the two sides.

Al-Ahly’s list witnessed the presence of 21 players, including Saleh Jumaa, the playmaker of the team, who witnessed a long period of absence and exclusion in his career with Fyler.

Musimani aspires to achieve a positive result in his first appearance with Al-Ahly, which will have a negative impact on the contractors and may lead to losing hope in the competition for the title of the league.

Al Moqawloon is away from Pyramids, third in the rankings, by eight points, after the latter played the current round match, and before them Zamalek with 64 points, but he will be subject to a deduction of three points from his balance by the decision of the Egyptian Football Association.

The Arab Contractors losing any point in the Al-Ahly match or any of his next three meetings, will mean losing all hopes of the competition for the title formally, in light of his tying in direct confrontations with Zamalek, but his goal difference is less than the white.

The contractors need to finish his current season well after being in the top four since his start, but he has lost seven points in his last four matches to somewhat deviate from the third and fourth places.

These were the details of the news Al-Ahly begins the “Musimani stage” with a clash with Amal Al-Mokawloon for this day. We hope that we have succeeded by giving you the full details and information. To follow all our news, you can subscribe to the alerts system or to one of our different systems to provide you with all that is new.