Macron's meeting with Fairouz a strong message to politicians 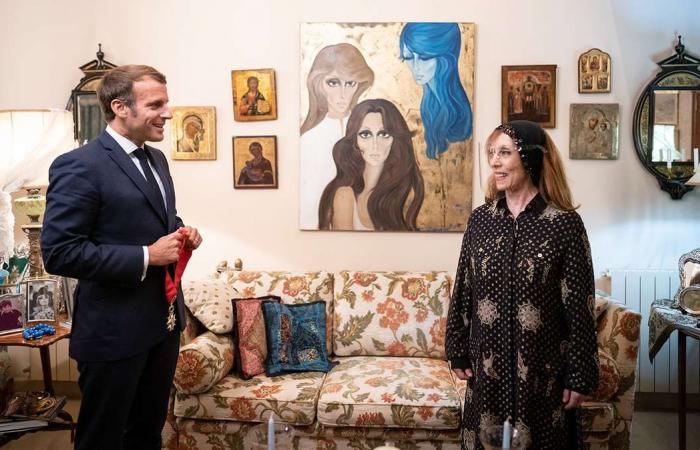 Hind Al Soulia - Riyadh - French President Emmanuel Macron had dinner with revered Lebanese singer Fairouz on Monday evening, in what was his first planned meeting upon arrival in Lebanon and a decision that many perceived as a snub to Lebanon's much-criticised political elite after the Beirut disaster.

The French leader, who visited the Lebanese capital following a major explosion on August 4 that killed at least 190 people, arrived on Monday at Rafik Hariri International Airport, where he was greeted by Lebanese President Michel Aoun.

His decision to meet with a non-political public figure upon his arrival struck a chord with many Lebanese.

“I grew up to the sound of Fairouz's voice,” says Maya Mokaddem, a 52-year-old entrepreneur living in Beirut. “She is a symbol of Lebanese patriotism and strength.”

Mr Macron granted Fairouz the Legion of Honour, France’s highest order of merit for civilians or military personnel. The artist, who is rarely seen in public and hasn’t performed live in almost a decade, posted photographs of her meeting with Mr Macron on her official Twitter account. The images were widely shared on social media in Lebanon.

For Jana Al Ahmar, 30, Fairouz is Lebanon’s best ambassador to the world. The aid worker living in the Bekaa Valley says these images send "a strong message to politicians: Fairouz's Lebanon is more beautiful than the reality they have created for us.”

The 84-year-old singer has come to be a symbol of resilience and unity for many Lebanese. She did not stop singing and performing during the country’s 15-year civil war. One of her most famous songs is titled “Li Beirut” (For Beirut). The song, released in 1984, is a call for peace at the height of the civil war.

“I still remember when I saw her live in 1988. It was like hearing an angel sing,” says Ms Mokaddem. “She unites us all, when politicians only succeeded in dividing us.”

Lebanon is home to 18 officially recognised sects. Political affiliations often follow sectarian lines, making it difficult for one party to obtain a majority in parliament and for the different groups in power to agree on a political consensus.

This is Mr Macron’s second visit to Beirut in a month. After the blast left thousands injured and 300,000 people homeless, the French leader met with residents of the Beirut neighbourhood of Gemmayzeh, also widely perceived as a slight against the Lebanese elite before his meeting with Mr Aoun.

Four weeks after the incident, the cause of the fire that set off 2,750 tonnes of ammonium nitrate at the Beirut port remains unknown. The flammable material is used to make both fertilisers and industrial explosives and was stored unsafely at the port for at least six years.

Protesters believed that negligence on behalf of the political class is to blame for the explosion and the stalling of the investigation.

Many Lebanese are once again being forced to turn to the famous singer for solace in times of struggle after the explosion.

"I grew up during the civil war, and for as long as I can remember, Fairouz's voice was always there to console us," Ms Mokaddem said. "She was there for Lebanese in our happiest and darkest moments."

These were the details of the news Macron's meeting with Fairouz a strong message to politicians for this day. We hope that we have succeeded by giving you the full details and information. To follow all our news, you can subscribe to the alerts system or to one of our different systems to provide you with all that is new.

PREV Shows and cinema screenings must end at 9 p.m. during the...
NEXT New outflow in the life insurance market