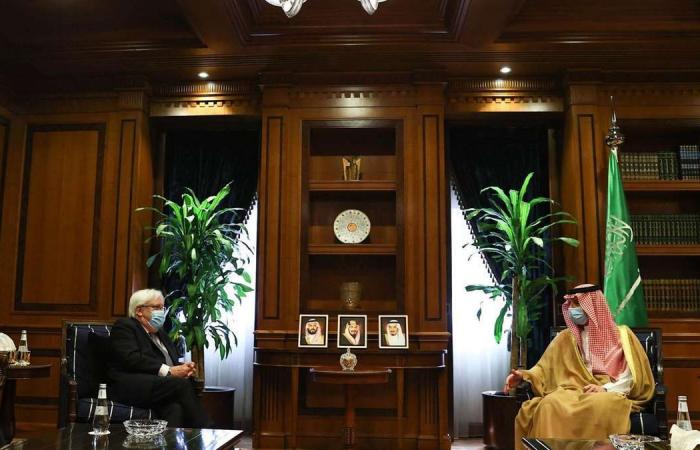 Thank you for your reading and interest in the news Yemen: UN Envoy in Saudi Arabia in bid to salvage peace deal and now with details

Hind Al Soulia - Riyadh - UN Special Envoy to Yemen Martin Griffiths is attempting to salvage progress on peace talks in the country in a visit to Saudi Arabia this week and hopes to start fresh talks soon.

Mr Griffiths proposal calls for a nationwide ceasefire, including halting all air, ground and naval hostilities, and for the parties to ensure compliance by forces on front lines.

But lack of trust between the two has slowed the UN's push for peace.

Mr Griffiths met with a delegation from Yemen’s government on Wednesday night, speaking with Vice President Ali Mohsen Al Ahmar and Prime Minister Maeen Abdul Malik who offered him their “remarks” on his proposal.

Yemeni officials described it as "essential" to moving things forward. They include their perspective on the role that Iran-backed Houthi rebels will have in the next government.

Yemen's leaders have lived in exile in Riyadh since the Iran-backed Houthis ousted the government and overran Sanaa in 2015.

Mr Al Ahmar said that the rebels continue to “procrastinate” on many issues, such as the rusting oil tanker off the western Yemeni coast that experts have warned will cause an environmental catastrophe if it breaks apart, according to a statement by Yemen’s Saba news agency.

The Yemeni official urged Mr Griffiths to pressure the Houthis to allow a team of experts to assess the damage caused to the ship to prevent the looming disaster.

“Mr Al Ahmar called on the UN envoy to clarify the Houthi stance to the Security Council towards this catastrophe,” said the statement.

The FSO Safer, moored off the coast of Ras Isa, is loaded with more than a million barrels of crude oil and experts warned of an environmental catastrophe if the vessel breaks apart.

Cracks are already appearing in the hull and seawater has reportedly entered the rusting hulk, which has been abandoned for years.

It is moored about 60 kilometres north of the rebel-held port of Hodeidah and was a storage centre for exporting Yemen’s crude oil.

Yemen’s Information Minister, Moamar El Eryani, said on Thursday the rebels have turned their back on international demands in addressing ways of reducing the risk of the oil tanker.

Mr El Eryani warned that if oil is split then it will cause an environmental, economic and humanitarian catastrophe “ten times bigger than the Beirut explosions” that occurred last week.

“I call on riparian countries to Red Sea to sense the danger, unify their efforts and play a pivotal role in confronting this to avoid a potential disaster,” Mr El Eryani said on Twitter.

These were the details of the news Yemen: UN Envoy in Saudi Arabia in bid to salvage peace deal for this day. We hope that we have succeeded by giving you the full details and information. To follow all our news, you can subscribe to the alerts system or to one of our different systems to provide you with all that is new.