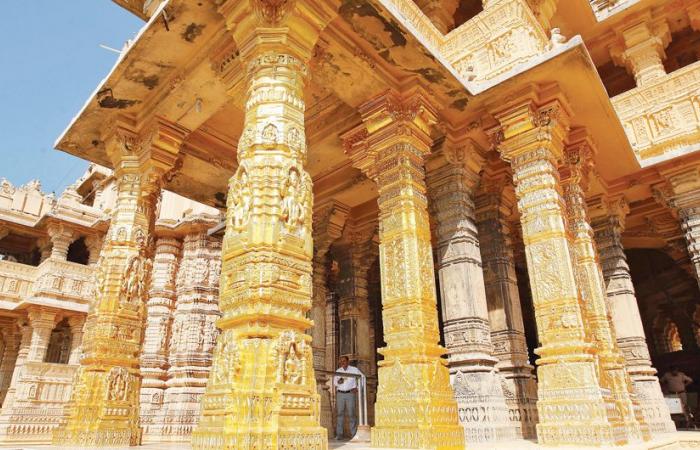 “This has been a tradition in my family to visit the Tirupati Temple at least once every year. Sometimes I visit twice also if I get a good business deal. The offerings to the temple is a way of thanking God for blessing me,” the Mumbai-based builder told Arab News.

He is not alone. Under normal circumstances, the nearly 300-year-old Tirupati Temple would be frequented by 100,000 people every day, earning $120 million in gifts and donations annually, while its total worth is estimated to be $11 billion.
However, since a nationwide lockdown was imposed in March, it has impacted the footfall to all places of worship across the country.
India is home to some of the world’s wealthiest temples, with some earning more in donations every year than a successful business enterprise.
According to a 2015 assessment by the World Gold Council, India’s temples hold about 2,000 tons of gold, worth about $100 billion, while the country’s central bank placed the value at 557.7 tons of gold based on its 2013 estimate.
One among these is the Shirdi Temple, located in the western Indian state of Maharashtra. Less than 100 years old, it is very popular among devotees and holds wealth worth $100 million.
Next in line is the 200-year-old Siddhivinayak Temple in India’s financial capital of Mumbai, which is said to have assets worth $20 million.
However, none of these are a patch on the 1,000-year-old Sree Padmanabhaswamy Temple in the southern Indian city of Thiruvananthapuram, in Kerala, which historians believe is worth $20 billion, making it India’s and one of the world’s richest temples.
“No other temple in the world has claimed to have so many antiques as the Sree Padmanabhaswamy Temple claims to have. Only one vault of the temple has been opened; imagine its wealth when the other vaults are opened,” Lekshmy Rajeev, a Kerala-based poet and temple historian, told Arab News.
The temple came to national and international consciousness in 2011 when one of its vaults was opened, yielding sacks of gold coins, diamonds and antique jewelry.
The other vault has not been opened yet; the royal family believes doing so would bring bad luck. With the kind of wealth the temple has, one can build 10 Burj Khalifas, the world’s tallest building (2,717 feet), worth $1.5 billion.
The temple came under the spotlight recently over ownership claims, with its former royals taking the matter to court.
It follows a 2011 decision by the Kerala high court to give the state ownership of the ancient religious place following the death of its head, Sree Chithira Thirunal Balarama Varma, the last ruling Maharaja of Travancore in 1991.
On July 13 this year, the apex court reinstated ownership of the temple to its former royal, overruling the 2011 ruling of the Kerala high court.
“We allow the appeal of the royal family of Travancore. Death does not affect Shebaitship (management and maintenance of the deity) of the Travancore Family,” the two-member bench said in the order.
It ruled that a new committee set up by the Travancore royal family would run the temple and decide what to do with its wealth, including the contents of an unopened vault.
“A large number of devotees had prayed for us. The judgment is their victory,” a member of the former royal family, Gauri Lakshmi Bai, told reporters after the verdict in Thiruvananthapuram at the time.
The apex court verdict has ignited the old debate about who should manage the temple and whether the wealth of religious places can be used for the public good.
Experts, however, are divided on the matter. “The Supreme Court did not leave the administration of the temple to the former royal family, as many thought and quickly interpreted. There are checks and balances in place, and at the same time the court wants to recover the missing money from the vault from the royal family,” Rajeev said.
She added that using a temple’s wealth “strictly for the welfare of the people would be the ideal thing.”
However, Manu S. Pillai, author of the award-winning book, “The Ivory Throne: Chronicles of the House of Travancore,” said such a proposal would be “alarming.”
“The value of the temple’s treasure is not monetary alone but also historical. What is reasonable, on the other hand, is placing some of it in a museum run by the temple authorities,” Pillai, who has written extensively on the royal family of Travancore, which has been managing the Sree Padmanabhaswamy Temple, told Arab News.
Most of the wealth acquired by the temples are from donations by individual devotees. Experts say this is due to a desire “to wash their sins,” which prompts a majority to indulge in such extravagant donations.
“It’s a paradox that India is a land of many homeless and hungry people and gods are rich,” Rajeev said.
“Each temple in India represents a myth or ritual, or some miracle — and people believe them blindly. People donate money as a votive; business tycoons donate a minuscule amount from the black money they amass thinking that it would wash away their sins,” she added.
Pillai agrees and adds that donating to temples also offers “social and cultural validation” to many.
“Temples could be used to legitimize political changes, to create patronage networks, to control economic channels. While an ordinary devotee may pay small amounts willingly out of love for the deity and a desire to contribute to the institution’s upkeep, there are public figures for whom large donations bring social prestige. So it is a mix of several things,” he said.

These were the details of the news India’s crazy-rich temples get wealthier by the day for this day. We hope that we have succeeded by giving you the full details and information. To follow all our news, you can subscribe to the alerts system or to one of our different systems to provide you with all that is new.