France will require face masks indoors as coronavirus picks up 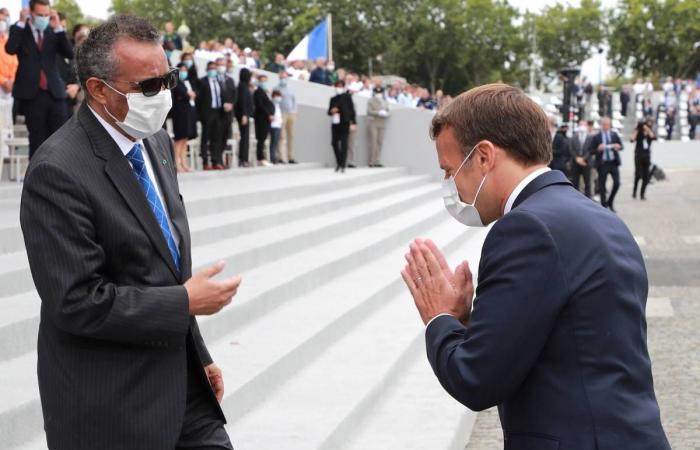 French President Emmanuel Macron said Tuesday that face masks will soon be required in public indoor spaces to curtail the coronavirus outbreak, acknowledging that infections were again on the rise.

His comments, in a television interview marking Bastille Day, came after he oversaw the traditional military ceremony that was drastically downsized because of the pandemic.

"I would like to make masks mandatory in all enclosed public spaces," Macron said in the interview, a Bastille Day tradition he had shunned since taking office three years ago.

"We have indications that (the outbreak) is accelerating a bit," he added, suggesting that his government would require masks in shops and public buildings from August 1.

He later posted on Twitter that "Wearing a mask in enclosed public spaces will be mandatory in the coming weeks."

The virus reproduction rate, the "R" ratio, has again risen above one in France, he said in the interview, meaning that a person infected with Covid-19 is likely spreading the disease to at least one other person.

Macron's comments come as doctors have warned of a potential second wave of infections that could again overwhelm hospitals and require new lockdowns that could further hammer the economy.

Asked whether France had enough masks in case of a new spike in cases, following massive shortages as the outbreak worsened in March, Macron said: "We will be ready."

"We have secured both the stocks and the supply sources, and we are organised on the ground, to allow us to deal with an upsurge, if it comes," he said.

He also said the government's "massive" recovery plan would reach 100 billion euros (Dh419 billion), on top of more than 460 billion euros (Dh1.92 trillion) spent so far to limit the social and economic devastation from the two-month lockdown imposed in mid-March.

Priority will be placed on investments to fight climate change, he said, such as increasing freight transport by rail instead of trucks and providing subsidies for improving energy efficiency in homes and public buildings.

"I believe we can build a different country within the next 10 years," he said.

Fearing contagion risks, authorities called off the annual military parade along the Champs-Elysees avenue in Paris that marks the July 14, 1789, storming of the Bastille prison that launched the French Revolution.

Instead, Macron presided over a scaled-down gathering of just 2,000 soldiers -- half the usual number -- at the Place de la Concorde, where several dozen doctors, nurses and other careworkers were given pride of place.

Several were in tears as a military troupe saluted them with the national anthem "La Marseillaise" to close the ceremony, as jets flew over trailing blue, white and red smoke.

Macron personally thanked many of them, a day after his government agreed an eight billion euro (Dh33.5 billion) package of pay hikes for nurses and careworkers.

He then donned a face mask to visit with guests who included Tedros Adhanom Ghebreyesus, director general of the World Health Organization.

Critics have accused Macron of initially underestimating and then mishandling a crisis that has now caused more than 30,000 deaths in France.

And some health workers say the government has still not done enough -- two people were briefly detained after they launched balloons near the Place de la Concorde bearing a banner that said "Behind the tributes, Macron is suffocating hospitals."

Elsewhere in Paris several thousands of people marched to demand more money and resources for careworkers.

They were later joined at the Place de la Bastille by "yellow vest" anti-government protesters, where some clashed briefly with police who fired tear gas.

But no crowds were allowed anywhere near the Concorde square, where just 2,500 guests were invited to a ceremony lacking the usual display of military equipment -- only two WWII tanks trundled noisily across the paving stones.

Large portions of Paris remained closed Tuesday to avoid mass gatherings for the Bastille Day fireworks, and most other cities have called off their shows altogether.

These were the details of the news France will require face masks indoors as coronavirus picks up for this day. We hope that we have succeeded by giving you the full details and information. To follow all our news, you can subscribe to the alerts system or to one of our different systems to provide you with all that is new.