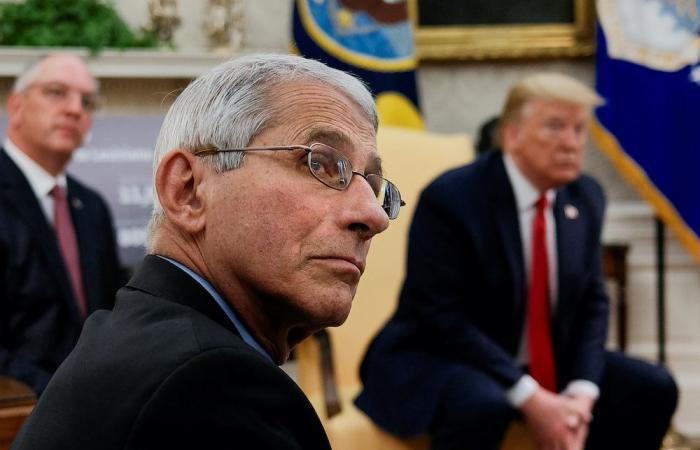 Hello and welcome to the details of Trump bashes US health experts, Fauci urges caution, as virus cases surge and now with the details

WASHINGTON, July 14 — President Donald Trump yesterday took a swipe at health experts in his government leading the US response to the coronavirus, and one of them, Dr Anthony Fauci, answered with an appeal for states to stick to guidelines to snuff out a surge in cases.

The Republican president, seeking re-election in November, has been increasingly critical of government health officials and their guidance as a steady rise in infections threatens the easing of shutdown restrictions across the country.

Trump retweeted to his 83 million followers the accusations of a former game show host that “everyone is lying,” including the federal Centers for Disease Control and Prevention (CDC).

“The most outrageous lies are the ones about Covid 19. Everyone is lying. The CDC, Media, Democrats, our Doctors, not all but most, that we are told to trust,” Chuck Woolery wrote Sunday night without citing evidence.

Yesterday, Trump also retweeted an April post from Woolery's podcast co-host that Fauci, director of the National Institute of Allergy and Infectious Diseases, wants to require “an ID card to go shopping.” As the spread of the coronavirus accelerated months ago, Fauci said it was possible the United States could in the future issue a certification of immunity.

The White House did not respond to questions on whether the president believed the CDC was lying.

Trump told reporters later at the White House: “I have a very good relationship with Dr Fauci.”

“I find him to be a very nice person. I don't always agree with him,” Trump said.

Fauci yesterday ascribed the surge in coronavirus cases to the country's failure to shut down completely, then a rush to reopen too soon, and urged a commitment to guidelines to rub out the disease.

“All you needed to do was look at the films on TV of people in some states who went from shutdown to complete throwing caution to the wind — bars that were crowded, people without masks,” Fauci said during a Stanford University event.

Fauci said he was confident the United States would get a handle on the virus “if we step back. You don't necessarily need to shut down again, but pull back a bit, and then proceed in a very prudent way of observing the guidelines, of going from step to step.”

Tensions with Fauci have risen with the decline of Trump's popularity in the polls over the president's handling of the outbreak. Fauci said in a Financial Times interview last week he had not briefed Trump in two months.

Fauci's emphasis on protections including physical distancing, wearing masks, avoiding crowds and washing hands have put him at odds with a president eager to get people back to work to boost the economy.

The White House over the weekend distributed a list of statements Fauci made early in the pandemic that turned out to be wrong as understanding of the disease developed, according to media reports. But the White House said that it only sent responses to dozens of questions it had received from the Washington Post.

Health officials and the CDC have pleaded with the public to wear masks to limit the spread of the virus, but the issue has become a politically divisive issue in the United States unlike in many other countries which have seen far lower rates of infection and death.

Trump wore a mask for the first time in public when he visited a Washington D.C.-area military medical center on Saturday. He had previously refused to wear a mask in public or ask Americans to wear face coverings, saying it was a personal choice. — Reuters

These were the details of the news Trump bashes US health experts, Fauci urges caution, as virus cases surge for this day. We hope that we have succeeded by giving you the full details and information. To follow all our news, you can subscribe to the alerts system or to one of our different systems to provide you with all that is new.

PREV Over 168 million children miss out on nearly a year of schooling, UNICEF says
NEXT Kuwait breaks daily COVID-19 case record for third day in a row