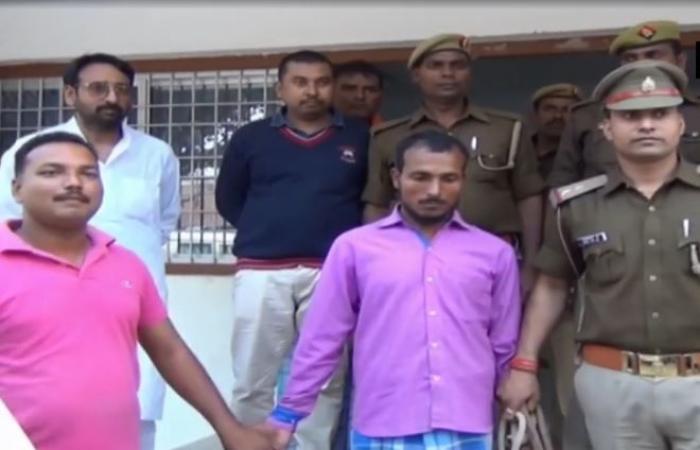 Aden - Yasmine El Tohamy - The accused said that he had marked the target a couple of weeks in advance.

The alacrity with which he narrates how he raped a woman and her 10-year-old daughter and then murdered them, is shocking and disturbing.

He even says that he raped the women even after she was dead. "I pushed the door open and entered the room. A bamboo stick fell on the ground and the woman's husband, 35, woke up, I hit him with a brick that I had picked up from outside. I hit him twice. He fell from the bed onto the ground and died.

"The woman got up hearing the sound. I hit her too. I saw a baby sleeping in between. I hit the baby who also died. I hit everyone I saw," he is seen telling the police.

In a rare video confession Nasiruddin narrates how he planned and executed the rape and murders - giving chilling details sans any sign of repentance.

The incident took place last week in Azamgarh and Nasiruddin was arrested on Monday.

The accused tells in the video that he had marked the target a couple of weeks in advance. He had gathered information about the family and the lack of security measures at the house of the victims.

The accused admitted that he even took a sex-stimulating drug before he set out to commit rape.

He said that when he reached the victims' home, he found the lane deserted. Someone had switched on a bulb outside their home. He removed the bulb from its holder and headed towards the main door of the victims' house.

Nasiruddin raped the woman even as she was taking her last few breaths. "She was still moving when I did it. I got bloodstains on my shirt near the shoulder. When I was going out, I saw the stain and came back to clean it," he said.

The police has said that he raped her the second time when she was already dead.

Nasiruddin was in the house for three hours and made a video of the act, which he later showed to his sister-in-law.

When asked why he attacked the 10-year-old girl, Nasiruddin said, "She got up asking her mother to give her water. I told her to go back to sleep quietly. She started raising an alarm "thief, thief" and I hit her with the brick that I had kept on the bed. Then I raped her too," he narrated.

The video confession has come at a time when the nation is debating how to make it safer for women in the wake of gang rape and murder of a Hyderabad veterinarian.

She was raped, murdered and burnt in Hyderabad on November 27. Protests are being held in various parts of the country demanding severest punishment to the culprits.

These were the details of the news India News - Necrophile's chilling video confession of woman and daughter's rape in India for this day. We hope that we have succeeded by giving you the full details and information. To follow all our news, you can subscribe to the alerts system or to one of our different systems to provide you with all that is new.