Aden - Yasmin Abdel Azim - Prayagraj: In a shocking incident, a four-year-old girl was allegedly killed by her stepfather after she asked for a balloon.

The child's mother claimed that her husband had killed her daughter only because she was insisting on buying a balloon.

According to Brijesh Srivastava, Additional Superintendent of Police (ASP), the minor's mother informed the police of the incident on Tuesday.

"By the time police reached the spot, the girl was dead and the accused was found in an injured condition. A case of murder has been registered against the accused and he has been detained and is in hospital," the ASP said.

The family who hailed from Siddhartha Nagar was living in a rented house in Khuldabad area.

A quarrel broke out between the husband and his wife and the man took his stepdaughter into a room. When police arrived at the spot, the man was found in an unconscious state and the child was dead.

"My husband and I were out to buy medicines when my daughter asked for a balloon. My husband started beating her and when I tried to stop him, he pushed me off the bike and took the girl away with him. He returned home and locked himself up in a room. I called the police and found out that he had killed my daughter and injured himself as well," the mother said.

These were the details of the news Stepfather kills girl in UP for asking for balloon for this day. We hope that we have succeeded by giving you the full details and information. To follow all our news, you can subscribe to the alerts system or to one of our different systems to provide you with all that is new. 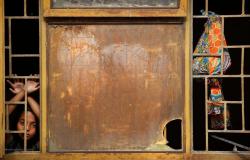