Thank you for reading the news about Modi tells Congress to protest against Pakistan, not CAA and now with the details

Slamming the Congress for opposing the Citizenship (Amendment) Act (CAA), Prime Minister Narendra Modi on Thursday dared the opposition party to protest against Pakistan for persecuting Hindus living as minorities in the neighbouring country.

"You (Congress leaders) should protest against Pakistan for persecuting Hindus, Sikhs, Parsis and Christians living there as minorities than opposing the CAA, meant to help them return to India and live with dignity and self-respect," said Modi at a public meeting here, about 70 km from Bengaluru.

Addressing hundreds of students, teachers, devotees and followers of Siddaganga Mutt's Shivakumar Swamji, the Prime Minister accused the Congress of opposing even the entry of Dalits and other Hindus from Pakistan.

"The Congress is misleading other parties in opposing the Constitution, as the CAA is the law after its bill was passed by Parliament last month," said Modi in his 30-minute speech in Hindi, which was translated into the local language (Kannada) by Union Parliamentary Affairs Minister Prahlad Joshi, who hails from Dharwad in Karnataka.

"Congress leaders don't have time or intention to condemn Pakistan. It's our duty to stand by those who are fleeing Pakistan to India and help them," asserted Modi.

"We cannot leave the Hindus, Sikhs, Christians, fleeing, to their fate and not worry about their welfare as they are also our brothers and sisters," reiterated Modi.

Greeting the gathering and wishing them a happy new year in Kannada, Modi said he was blessed to begin 2020 from a sacred place like the mutt.

The Prime Minister also laid the foundation stone for building a museum in the memory of the late Shivakumar Swamiji in the mutt premises.

Earlier, Modi arrived in Bengaluru from New Delhi in an IAF aircraft and flew to Tumakuru in a military chopper to visit the mutt and address the farmers at a rally in the town later.

These were the details of the news India News - Modi tells Congress to protest against Pakistan, not CAA for this day. We hope that we have succeeded by giving you the full details and information. To follow all our news, you can subscribe to the alerts system or to one of our different systems to provide you with all that is new. 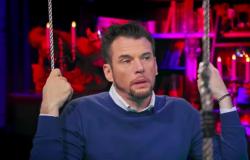