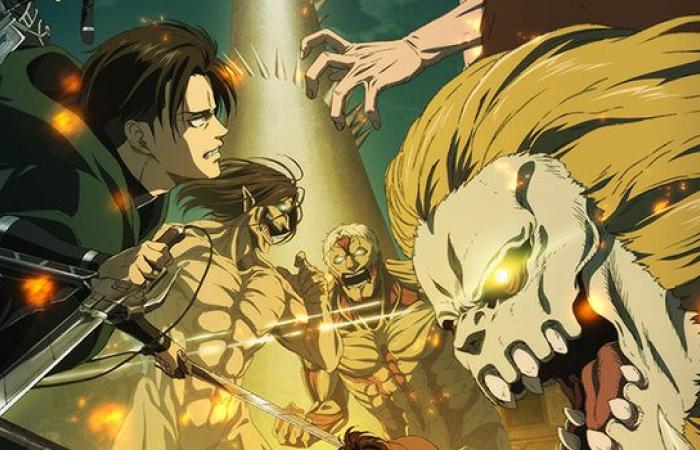 The final season of “Attack on Titan” (Japanese: “Shingeki no Kyojin”) started today! So that you know where you can watch the fourth and last season in the simulcast, we have summarized all the details here.

Here you can see the final season in the stream

“Attack on Titan: Final Season” can be seen from today every Sunday at 6:34 pm in the original Japanese with German subtitles on WAKANIM. In order to be able to stream the anime there, a paid VIP subscription for 5 euros per month or 50 euros per year is required. The total of 16 new episodes will not be available for free after one week.

Alternatively, there is also the possibility of buying the anime from WAKANIM and downloading it DRM-free in 1080p. The costs are 1 euro per episode or 10 euros per season (around 10 to 13 episodes). Since the encoding process takes longer than with the streams, the downloads are only available about two hours later.

WAKANIM has secured the exclusive rights to the fourth season of “Attack on Titan”. The new episodes will therefore not be shown in the simulcast from any other provider. The first three seasons were still on Anime on Demand. The final season will not be shown there.

>> To the series at WAKANIM

“Throughout the ages, this titan has sought freedom, fought for freedom. He’s the attacking Titan. ”

At last the truth about the world outside the walls and the titans was revealed. To get that far, people have already had to make too great a sacrifice. Yet they do not give up because they still want to see the sea beyond the walls, which symbolizes freedom, with their own eyes.

Six years have passed since the first attack by the “Colossal Titan”. Since then, the reconnaissance troop has led fearless expeditions into the areas behind the Wall Maria. “Beyond the wall is the sea, and beyond that is freedom. I’ve always believed in that … ”

For the first time, people who have lived their lives within the walls are now reaching the sea. But is there actually freedom behind its infinitely wide horizon? A new chapter begins in the story of Eren Jäger.

These were the details of the news “Attack on Titan: Final Season” is now streaming for this day. We hope that we have succeeded by giving you the full details and information. To follow all our news, you can subscribe to the alerts system or to one of our different systems to provide you with all that is new.