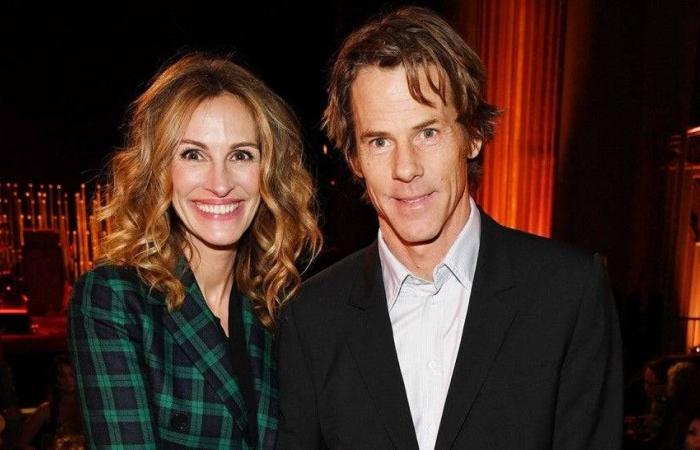 Thank you for reading the news about Julia Roberts celebrates 18th ... and now with the details

Aden - Yasmine El Tohamy - On the occasion of completing 18 years as a married couple, American actor Julia Roberts and husband Danny Moder expressed their happiness on social media on Saturday.

According to People Magazine, the pair celebrated their anniversary with Roberts sharing a sweet photo of her planting a kiss on Moder's cheek.

The Pretty Woman actor wrote alongside the photo, "18 years," adding the hashtag #heckyes.

The 52-year-old actor and Moder wed in 2002 after meeting on the set of the 2000 film The Mexican, where Moder worked as a cameraman. The pair are parents to 12-year-old son Henry Daniel, and 15-year-old twins Hazel Patricia and Phinnaeus "Finn" Walter.

Earlier this year, the couple stepped out for a date night, attending pal Sean Penn's 10th annual CORE gala in Los Angeles. The Runaway Bride actor wore a plaid green skirt suit for the night out, while her cinematographer hubby opted for a classic black-and-white ensemble.

In 2017, Roberts told the outlet that she found her fairytale ending with Moder. "I mean, every day my husband walks in the door it's like a recurrence.

In an interview with Extra a year later, Roberts raved about her husband, calling him an "awesome human being."

"If we go to work together and go home together, all that work time, when you come home and [say], 'Oh, honey, how was your day?' We did all that in the day and in the car," she told the outlet. "So when we got home we got to put that all away, which was really delightful."

"We have so much fun," the Notting Hill star added.

These were the details of the news Bollywood News - Julia Roberts celebrates 18th ... for this day. We hope that we have succeeded by giving you the full details and information. To follow all our news, you can subscribe to the alerts system or to one of our different systems to provide you with all that is new.