The date of suhoor, iftar and fasting hours, the first day... 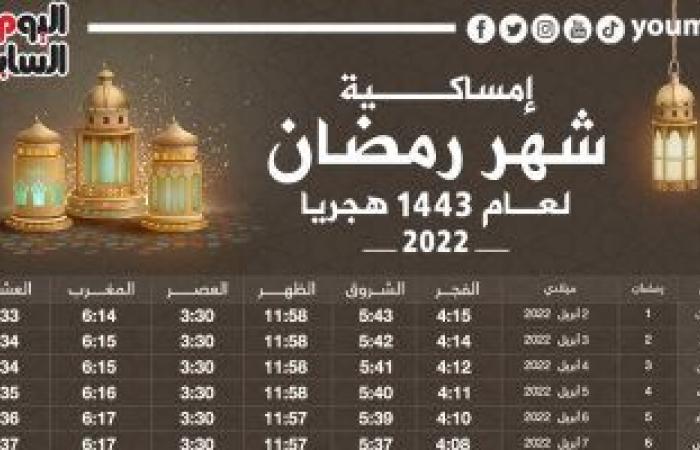 A few days separate us from the date of the holy month of Ramadan for the year 1443 AH, which now has about 3 days remaining on its first day, according to astronomical calculations.

The number of fasting hours is 14 hours and 19 minutes

God subjugated the earth and the sky to serve man, so the sky was rich with celestial bodies that can study time through their movement, for the stability and stability of their movement like the stars “the sun, the planet and the moons.” The Arabic word for “calendar” is the first day of the month.

The Hijri, lunar or Islamic calendar is a calendar based on the lunar cycle to determine the months. Some Arab countries, such as Saudi Arabia, take it as the official calendar of the state. It was established by Caliph Omar Ibn Al-Khattab and made the migration of the Messenger, may God’s prayers and peace be upon him, from Mecca to Medina on Rabi’ Al-Awwal 12 (September 24 A.D. 622 AD) as a reference for the first year in it, and this is the reason for calling it the Hijri calendar.

These were the details of the news The date of suhoor, iftar and fasting hours, the first day... for this day. We hope that we have succeeded by giving you the full details and information. To follow all our news, you can subscribe to the alerts system or to one of our different systems to provide you with all that is new.