President Sisi is on an inspection tour of a number of... 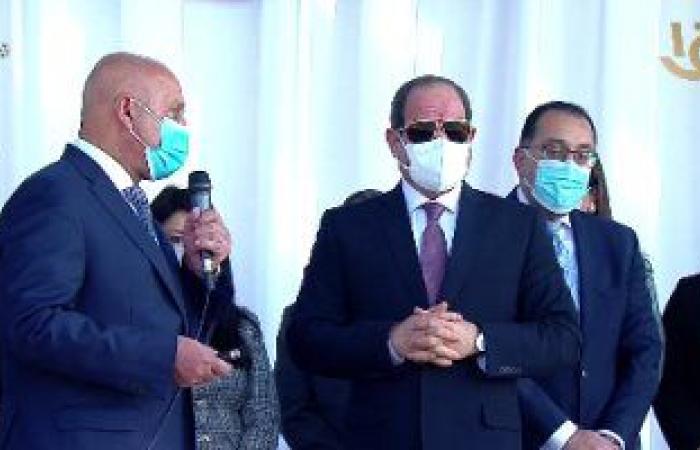 conducted the chief Abdel Fattah SisiA short while ago, an inspection tour of Qena Governorate, in order to see a series of new national projects in various sectors in Upper Egypt, as part of the “Upper Week” activities within the framework of the state’s efforts to achieve an integrated development and service renaissance for the people of Upper Egypt, and to provide direct and indirect job opportunities

During the tour, President Abdel-Fattah El-Sisi listened to an explanation from Lieutenant-General Kamel El-Wazir, the Minister of Transport, about the mechanism of work in paving and equipping the new axes.

President Abdel-Fattah El-Sisi confirmed, commenting on the Minister of Transport’s speech, that Lieutenant-General Kamel Al-Minister talked about the projects of the Ministry of Transport and did not talk about all the private projects in other sectors, whether the Urban Communities Authority or the Engineering Authority in other places, continuing: “I say to whom we will talk about in Upper Egypt only..1.6 trillion pounds for transportation, only.. Abu Qir has new sidewalks, about 6-7 kilometers, with a depth of 22 meters, for the sake of the article..The projects of the Ministry of Transport are large in size.”

President Sisi added, during his speech at the inauguration of new national projects in Upper Egypt: “Another volume was not mentioned here… I will not say that he is supposed to say them… by saying the volume of work that takes place in Egypt in all sectors… 1.6 trillion… 1600 billion… in each Sectors… Dr. Mostafa Madbouly is saying 6.2 trillion pounds… 6 billion and 200 million pounds, and he is still working.”

The President added, “The last need is… the preservation of these sectors and foreign roads, especially in the new axes.. Be careful not to trespass.. Movement has become easy.. My son tells you next to the new road.. I am coming by plane.. I can see the desert roads east and west of Fadia.” .. We build on it and move 2 km to your agricultural land.. With all thanks to everyone who contributed to the projects.. We are moving vigorously in all fields.”

Ambassador Bassam Rady, the official spokesman for the Presidency of the Republic, said that the inauguration of national projects today comes within the activities of the “Upper Week” within the framework of the state’s efforts to achieve an integrated development and service renaissance for the people of Upper Egypt, and to provide direct and indirect job opportunities, as the openings include a number of industrial complexes and axes And roads, especially the transverse axes on the Nile.

These were the details of the news President Sisi is on an inspection tour of a number of... for this day. We hope that we have succeeded by giving you the full details and information. To follow all our news, you can subscribe to the alerts system or to one of our different systems to provide you with all that is new.