For this reason.. the World Bank grants Egypt a loan of... The Minister of International Cooperation and the Governor of Egypt at the World Bank Group announced Rania Al-MashatOn Thursday, the Bank Group’s Board of Executive Directors approved the financing of development policies for Egypt, at a value of 360 million dollars, within the framework of the strategic partnership between the two sides, with the aim of supporting the country’s recovery. The Egyptian economy After the Corona pandemic.

She said that the loan also aims to promote comprehensive and sustainable growth, and advance national efforts aimed at achieving sustainable development through the implementation of many reform measures.

Al-Mashat revealed that the financing for development policies, approved by the World Bank, comes within the framework of joint development financing between the Bank and the Asian Infrastructure Investment Bank, which aims to support the Egyptian economy and the second wave of structural reforms, through three main pillars, which are enhancing financial sustainability and stimulating the participation of the sector. private development efforts, and the promotion of women’s economic empowerment.

The minister added that the government is moving forward with the continuation of economic and structural reforms, which are an integral part of its quest to achieve a flexible, comprehensive and sustainable economic recovery that enables the state to face future shocks, and stimulates efforts aimed at achieving the national development vision that is consistent with the United Nations sustainable development agenda 2030. She added that this project is the first of the World Bank projects in the Middle East and North Africa, which focuses on strengthening the role of Egyptian women in support of their efforts to achieve economic and social development.

“We are proud of our participation in supporting the Egyptian government’s efforts and structural reforms to build back better, through this financing and many more, one of the main objectives of this operation is to drive growth to become more inclusive and resilient in the Facing future shocks, by addressing long-term structural challenges and promoting women’s empowerment.

The World Bank Group commended the measures taken by Egypt and the quick measures to confront the Corona pandemic, as well as the economic and structural reforms that were implemented to mitigate the repercussions of the epidemic and increase the competitiveness of the economy, which prompted it to become one of the few countries that maintained positive growth during the pandemic period, due to The economic reform program that has been implemented since 2016.
The ongoing development cooperation portfolio with the World Bank includes 18 projects in various sectors, including education, health, transportation, social solidarity, petroleum, housing, sanitation, local development and the environment, with a value of $5.8 billion.

These were the details of the news For this reason.. the World Bank grants Egypt a loan of... for this day. We hope that we have succeeded by giving you the full details and information. To follow all our news, you can subscribe to the alerts system or to one of our different systems to provide you with all that is new. 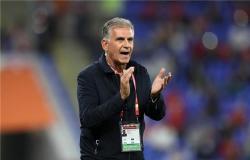