Celebrities who participated in El Gouna 2021 in old-fashioned dresses 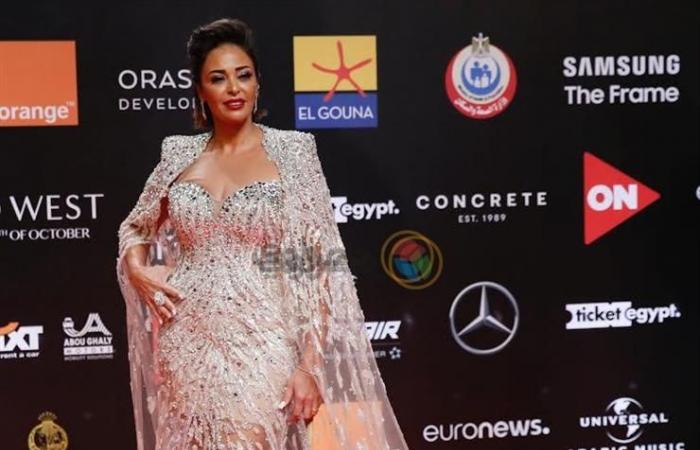 Stars race to capture the attention of photographers’ cameras and followers, at the El Gouna Film Festival, by appearing in full elegance on the red carpet and wearing the latest and most beautiful designs to attract attention to them.

There are some stars who appear with repeated looks, with old cuts, which is what we monitor in this report for the most prominent views of the artists on the red carpet for the current session of the El Gouna Festival in dresses with old styles.

With a look of the nineties, the artist Ilham Shaheen appeared at the opening ceremony of the festival, and she wore a long dress, Tiger Men, with flowers, with a distinctive design from the shoulders and chest area, with a shawl of the same shape and fabric as the dress, and she chose a bag and shoes to match the dress.

The artist, Dalia Al-Behairy, appeared with an attractive look, on the red carpet at the opening ceremony of the festival.

She wore diamond jewelry consisting of a collet and a ring, and she coordinated with her look a clutch in the same color as the dress.

The artist, Saba Mubarak, starred in a silver-colored cut dress, which is a recurring design, characterized by a bold leg opening, exposed from the back, and from an aesthetic point of view, she adopted a strong make-up, and left her hair hanging down, and coordinated with her look a clutch and shoes in silver.

Although the Lebanese actress, Nadine Nassib Njeim, caught the eye during the opening ceremony of the festival, she wore a frequent and consuming look, as she appeared in a long, long-sleeved dress in gold with a distinctive design from the shoulders and chest area, and she chose a bag and shoes in a color that suits her look.

Nadine Nassib Njeim left her tufts of hair falling across her shoulders and back with a distinctive and soft Wavy hairstyle, which matches her look.

On the fifth day of the festival, the artist Amina Khalil won the title of the most elegant and feminine look, as she adopted a glamorous look in a short, body-shaped silver dress, to highlight her grace embroidered with fringes and a V-shaped opening.

The shiny silver dress is one of the frequent looks in which many stars have appeared in various events.

On the fifth day of the festival, the artist, Loujain Omran, appeared in a soft, feminine look that highlighted her beauty and elegance, from a classic design.

She appeared in a dark blue dress, with a one-shoulder story, fitted with a backrest from the waist, and coordinated with it a golden clutch, and completed the look with a large necklace, and adopted strong make-up, and chose to have her hair lifted.

The El Gouna Film Festival lit its fifth birthday candle last Thursday, with an opening ceremony attended by art stars from around the world, and the ceremony witnessed the honoring of the artist Ahmed El Sakka and awarding him the Creative Achievement Award, for his artistic career.

The fifth edition of the festival concludes this year on Friday, with the participation of filmmakers from about 36 countries.

These were the details of the news Celebrities who participated in El Gouna 2021 in old-fashioned dresses for this day. We hope that we have succeeded by giving you the full details and information. To follow all our news, you can subscribe to the alerts system or to one of our different systems to provide you with all that is new.