It takes 20 minutes and is repeated twice.. the sun perpendicular... 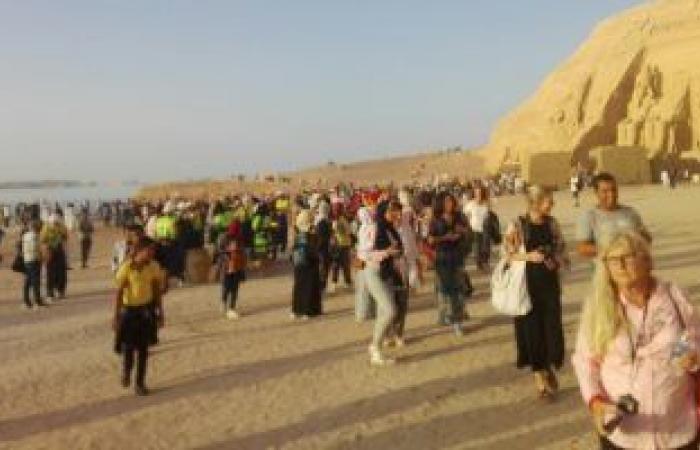 Egypt will celebrate the phenomenon of the sun perpendicular to the face of Ramses II in his great temple in the city of Abu Simbel in Aswan Governorate, tomorrow, Friday, October 22.

And “The Seventh Day” publishes the details of the phenomenon of the sun’s perpendicularity in Aswan in simplified points as follows:

1- The sun’s rays perpendicular to the Holy of Holies in Abu Simbel temples twice a year, February 22 and October 22.

2- The sun’s rays penetrate the front corridor of the entrance to the Temple of Ramses II, with a length of 200 meters, until it reaches the Holy of Holies.

4- The funny thing is that the sun does not perpendicular to the face of the statue of “Ptah”, which the ancients considered the god of darkness.

5- The phenomenon of perpendicular sun takes only 20 minutes on that day.

6- There are two accounts of the reason for the sun’s perpendicularity. The first is that the ancient Egyptians designed the temple based on the movement of the ark to determine the start and fertilization of the agricultural season, and the second narrative: that these two days coincide with the day of King Ramses II’s birth and the day he sat on the throne.

7- The Temple of Abu Simbel was subjected to drowning after the construction of the High Dam as a result of the accumulation of water behind the High Dam and the formation of Lake Nasser. The international campaign to save the monuments of Abu Simbel and Nubia began between 1964 and 1968, through UNESCO in cooperation with the Egyptian government, at a cost of 40 million dollars.

8- Moving the temple by dismantling the parts and statues of the temple and re-installing them in its new location at a height of 65 meters above the river level, and it is considered one of the greatest works in archaeological engineering.

9 – The temples of Abu Simbel were discovered on August 1, 1817, when the Italian explorer Giovanni Belonzi succeeded in finding them among the sands of the south.

10- The phenomenon of perpendicularity of the sun was discovered in 1874, when explorer “Amelia Edwards” and her accompanying team observed this phenomenon and recorded it in her book published in 1899 entitled “A Thousand Miles Above the Nile”.

11- King Ramses II built his great temple in Abu Simbel, and next to it he built a temple for his beloved wife, Queen Nefertari.

12- But the miracle remains that the days of the sun’s perpendicular perpendicularity are deliberately chosen and determined before the sculpting process, with what this entails of a full knowledge of the origins of astronomy and many calculations to determine the angle of deviation of the temple axis from the east beside the miracle in architecture that the axis is straight for a distance of more than sixty meters and no Especially that the temple is carved in the rock.

These were the details of the news It takes 20 minutes and is repeated twice.. the sun perpendicular... for this day. We hope that we have succeeded by giving you the full details and information. To follow all our news, you can subscribe to the alerts system or to one of our different systems to provide you with all that is new.