Video: A worker tries to commit suicide from the highest building... 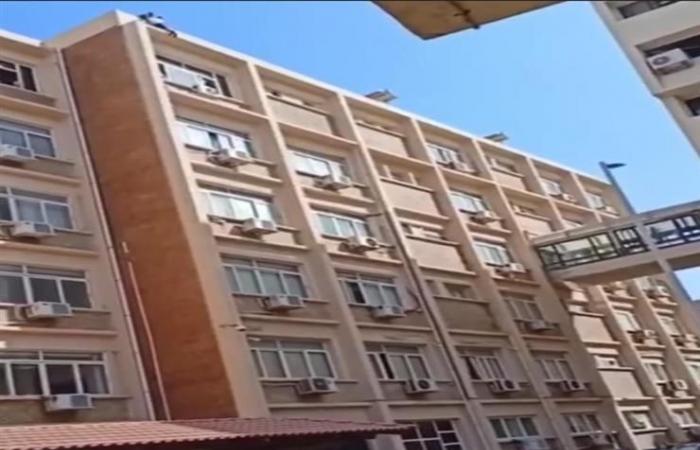 An employee at the Faculty of Commerce, Alexandria University, attempted suicide from the top of the faculty building inside the university campus, while the university’s security managed to control and rescue him.

Activists circulated a video clip widely on social media under the title “A Student Suicide Attempt at the Faculty of Law at Alexandria University” – which was later confirmed to be incorrect.

The video clip shows a person ascending to the roof of the amphitheater of the Faculty of Commerce at Alexandria University, specifically on the seventh floor, threatening to throw himself before the university security took control of him.

In the first official comment, the Faculty of Commerce, Alexandria University, issued today, Monday, the details of the aforementioned suicide attempt, stressing that the aforementioned is not a student of rights, but a worker for it.

The statement indicated that the suicide incident was from the top of the College of Commerce building, the hero of which was one of the college workers as a result of his nervous condition and convulsions.

He indicated that the worker did this after learning that the administrative affairs of the college had written a memorandum to take measures to terminate his service due to his absence from work for a period exceeding the legal period allowed, in accordance with the Civil Service Law No. 81 of 2016.

The statement added that the administrative security men of the college took control of the worker without any injuries, and he was transferred to the university’s therapeutic unit, and he was given the necessary sedatives.

The college confirmed that the worker was dismissed to his home, while the incident is still being investigated by the legal affairs to take the necessary according to the regulations of the law.

These were the details of the news Video: A worker tries to commit suicide from the highest building... for this day. We hope that we have succeeded by giving you the full details and information. To follow all our news, you can subscribe to the alerts system or to one of our different systems to provide you with all that is new.