The price of bread and a message to the people of... 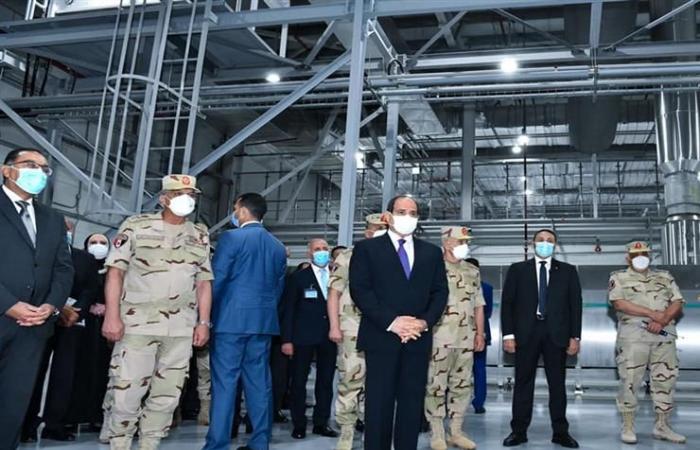 President Abdel Fattah El-Sisi urged citizens to preserve the remaining agricultural lands, stressing that encroachment on these lands is the main issue in the Egyptian countryside.

This came during President Sisi’s meeting, today, Tuesday, with editors and media professionals, during an inspection tour of the Food Industrial City (Silo Foods) in Sadat City in Menoufia.

He stressed that the population increase is a major issue that affected the support for a loaf of bread, pointing out that it is in the public interest to organize this increase in a way that provides a decent life for the citizen.

He added that the state is preparing a system in order to solve many issues of concern to the citizen, saying, “We are talking, for example, about nutrition in schools…at least 12 or 13 million students out of the 23 million students who are targeted, so that system must be arranged before The state… and we can, in a planned scientific way and with strong conscious implementation, create a system for my young sons and daughters that targets public health.”

He gave an example if 1.5 million children have a problem with stunting, and this is a large number and it is a big problem, and the state can target and treat them, through knowledge of their existence and the work of programs targeting them.

“When I met businessmen, I showed them my will to cooperate more with the state in order to increase Egyptian products in the Egyptian market, reduce imports and provide job opportunities,” he added.

He stressed that the process of obtaining the product (a loaf of bread) has witnessed a qualitative leap now. In the past, we witnessed crowds and queues in order to obtain a loaf of bread, but this phenomenon has been eliminated at the present time.

He stressed that when the reorganization of the system for a country of 100 million people is started, problems will be encountered, and therefore work must be done on good management of the population increase,
Pointing in this context to the issue of “school feeding”, which in the past cost the state 300 million pounds, and after that it became more than one billion pounds, and in light of the current situation, it will cost 8 billion pounds, wondering how the remaining 7 billion can be saved?

President Sisi pointed out that the problems facing the program of a decent life for the development of the Egyptian countryside are not only the mechanisms of its implementation, but the cost of its implementation, saying: “This was the issue of the issues of how to announce a project and there is doubt about the ability to secure funding.”

Regarding the time periods of the projects that are currently being implemented, President Sisi gave an example of what was done in the past in the construction of projects, where the project of building a “bridge” was announced on a financial budget for a period of one or two years. Taking from the project funding allocations, which causes the construction of the bridge to take 4 or 5 years, but at the present time the bridge is being built in only 3 months, not three years.

President Sisi said that “the whole world changes in order to make people happy, and to work in a state of real societal satisfaction.”

These were the details of the news The price of bread and a message to the people of... for this day. We hope that we have succeeded by giving you the full details and information. To follow all our news, you can subscribe to the alerts system or to one of our different systems to provide you with all that is new.