Why do some people refuse the Corona vaccine and how can... 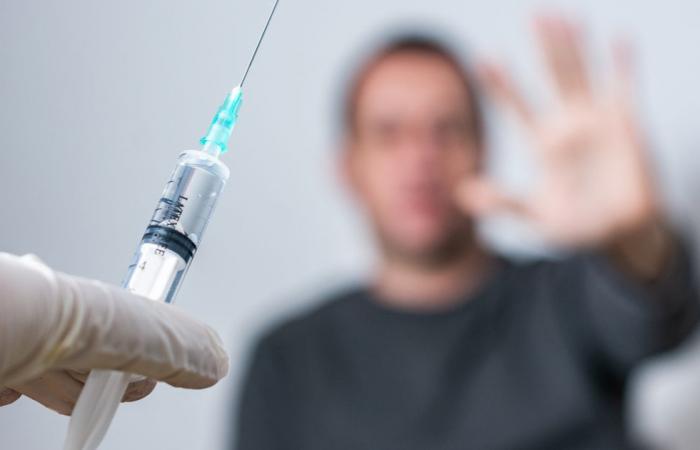 Writer Gina Clark says in a report published in the “Foreign Policy” magazine (foreign policyThe American newspaper, that 8.5 billion doses of the Corona virus vaccine were distributed around the world, until the beginning of this December, which makes efforts to combat this epidemic the largest health operation taking place in history.

However, the results of this process appear mixed, as the poorest countries in the world are deprived of their share of vaccine doses, while rich countries face a different problem, which is the reluctance of citizens to receive the vaccination, especially in specific places where feelings and skeptical theories abound in this matter.

The writer points to an example of this, which is the state of Saxony in eastern Germany, where the rate of vaccinated people was only 56%, and the percentage of people infected with infection in the state exceeded twice the general percentage in the country.

Skeptics focus on the feasibility or safety of vaccines, on the issue of accelerating research and limiting the experiments that have been conducted, but this type of situation is not new in the world, and sentiments rejecting the vaccine have existed for decades.

Although reluctance to receive vaccination may seem at first glance to be a rare behavior and confined to certain groups, especially since research confirms that only 8% of Americans present themselves as being against vaccinations, but in fact this issue is more widespread in the field of public health, And it will remain so for a long time.

Since about a year before the emergence of the Corona virus, the World Health Organization considered hesitation about vaccines as one of the 10 most dangerous phenomena for public health, and therefore it will not be possible to eradicate the phenomenon without understanding the complex psychological and cultural factors that push people to adopt these attitudes.

Psychologically, our feelings about vaccinations are anti-logical, as human behavior has always been motivated by rewards, especially tangible and immediate ones, which give a strong emotional response.

In addition, the reputation of vaccines suffers due to a psychological phenomenon known as the omission bias, as people see the harm caused by something, such as the side effects of the vaccine, and consider it more serious than the harm caused by refraining from vaccination, which is the harm of contracting the disease.

And perhaps the worst factor is that vaccines may become a victim of their success, as the high percentage of those vaccinated leads to the disappearance of the disease, and then generations arise without exposure to this disease that disappeared thanks to vaccination, similar to measles, for example, and therefore they do not feel any fear Consequences of abstaining from the drug.

When misinformation about the risks of vaccination meets with ignorance of the harms of the disease, the percentage of those who accept the vaccine is low, until another wave of that disease erupts.

Experience indicates that for individuals who are active in anti-vaccination campaigns, trying to convince them of the error of their beliefs only leads to more adherence to more extreme positions.

The writer points out that in the United States, too, anti-vaccination sentiments are often associated with conspiracy theories and political circles associated with the Republican Party, ideas that attract good numbers of people for several reasons, including that they make them feel smart and have exposed the lies of society.

Among the influential figures participating in this trend is former US President Donald Trump, who encouraged people to get the vaccine while he was in office, but before and after his presidency, he was expressing his doubts about this vaccine, and contributed to promoting these theories in conservative circles in the United States.

The writer indicates that a team of researchers in the United States had previously carried out experiments on people’s attitudes to the measles vaccine, and recently conducted another research on the Corona virus vaccine.

And last spring, the impact of various encouraging messages on vaccination against the Corona virus was studied, and a questionnaire was conducted that included a sample of 1,748 people from the southeastern states of America, representing various groups.

The researchers offered these participants each time one of 6 communication strategies that are used to persuade to receive the vaccine, including focusing on that it represents the only way to return to normal life in the United States, or focusing on the procedures approved by the US Food and Drug Administration and tests before approval is granted, Then these participants were presented with questions about their position on the vaccine.

This experience has shown that two methods have succeeded in increasing the number of people who are willing to go to receive the vaccination, and the first successful communication method focused on addressing omission bias, by indicating the risks associated with not receiving the vaccine, which far outweigh the risks of the vaccine itself.

As for the second method that succeeded, it was out of the ordinary, and was represented in making the vaccine seem like a heroic patriotic act, and a contribution to supporting the country in facing the challenges imposed by the epidemic.

However, the author cautions that these methods that have worked in the United States may not work elsewhere, since the problem of omission bias may be global, but the factors differ from country to country.

In conclusion, the writer calls for adopting these approaches in order to raise awareness of the importance of receiving a vaccination against the Corona virus, while coordinating the efforts of various social scientists in the world in order to identify the deep roots of this reluctance and rejection, with which the vaccine meets significant groups of people.

These were the details of the news Why do some people refuse the Corona vaccine and how can... for this day. We hope that we have succeeded by giving you the full details and information. To follow all our news, you can subscribe to the alerts system or to one of our different systems to provide you with all that is new.