More than 1,500 flights canceled around the world on Christmas Eve... 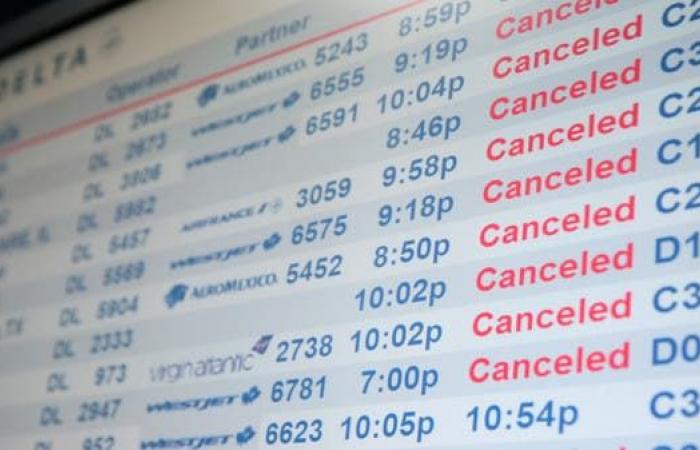 Thousands of potential travelers received the same alarming message on Thursday that their Christmas Eve flight was canceled at the last minute due to the recent surge in the number of omicron cases of the coronavirus.

canceled United Airlines Dozens of American flights were scheduled to leave airports Friday — along with dozens more that were supposed to take off on Saturday, according to Flight Aware.

Other airlines, including Delta, JetBlue and Allegiant, have done the same.

In Australia, dozens of flights were also canceled at airports in major cities such as Sydney and Melbourne, as the country’s coronavirus cases rose to their highest levels since the start of the pandemic.

Flight Aware showed that the number of cancellations globally from Thursday evening through Friday morning had increased to more than 1,500 flights, The New York Times reported.

It was the latest blow to the holiday season due to the new and rapidly transmissible Omicron variant, which now accounts for more than 70% of new coronavirus cases in the United States. Nearly 170,000 people test positive for the virus every day in the country, a 38% increase over the past two weeks, according to the New York Times’ coronavirus tracker.

In its statement, United Airlines said that “Omicron’s direct impact on our flight crews and the people who run our operations led to the cancellation.”

Dozens of customers have taken to social media to express their complaints about last-minute cancellations.

Officials for airlines in Australia, which has recorded more than 500 cases of Omicron, said many employees are unable to work after it was determined that they had close contact with cases of the Corona virus. Under government requirements, they are required to self-quarantine for seven days.

A representative of Jetstar Airways said via email this Friday afternoon local time: “A large number of our frontline team members are being asked to test and isolate close contacts given the increasing number of cases in the general community. As a result, we have had to make some late adjustments. on our schedule.

A Sydney Airport spokesperson said 80 flights arriving or departing on December 24 from the country’s most populous city, out of a total of 500, were canceled.

According to Melbourne Airport’s flight tracking website, more than 70 flights departing or arriving at the airport on December 24, out of 700, were also cancelled. Brisbane Airport announced that 45 flights were cancelled.

These were the details of the news More than 1,500 flights canceled around the world on Christmas Eve... for this day. We hope that we have succeeded by giving you the full details and information. To follow all our news, you can subscribe to the alerts system or to one of our different systems to provide you with all that is new.