A nasal spray to block the virus? Scientists could get... 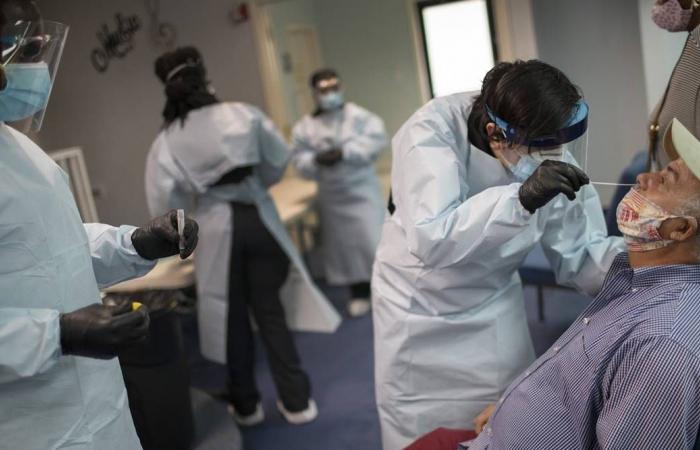 A nasal spray that blocks the absorption of the SARS-CoV-2 virus completely protected ferrets it was tested on. This emerges from a small study published Thursday by an international team of scientists. The study, which was limited to animals and has not yet been peer-reviewed, was reviewed by several health professionals at the request of the New York Times.

If the spray, which scientists have described as non-toxic and stable, is found to work in humans, it could offer a new way to fight the pandemic. A daily spray in the nose would act like a vaccine.

“It’s exciting to have something new that works against the coronavirus,” said Dr. Arturo Casadevall, chairman of immunology at the Johns Hopkins Bloomberg School of Public Health, who was not involved in the study. “I could imagine that this is part of the arsenal.”

The team would need additional funding to conduct human clinical trials. Dr. Anne Moscona, a Columbia pediatrician and microbiologist and co-author of the study, said she had filed a patent for the product and she hoped Columbia University would turn to the federal government’s Operation Warp Speed ​​or major pharmaceutical companies that these are looking for new ways to fight the coronavirus.

The spray attacks the virus directly. It contains a lipopeptide, a cholesterol particle that is linked to a chain of amino acids, the building blocks of proteins. This special lipopeptide corresponds exactly to a series of amino acids in the virus’ spike protein that the pathogen uses to attach to a human airway or a human lung cell.

Before a virus can inject its RNA into a cell, the spike must be effectively unpacked, exposing two chains of amino acids to fuse with the cell wall. As the spike retracts to complete the process, the lipopeptide in the spray sets itself in place, locks onto one of the spike’s amino acid chains, and prevents the virus from attaching itself.

“It’s like closing one zipper with a zipper, but you put another zipper in it so the two sides can’t meet,” said Matteo Porotto, a microbiologist at Columbia University and one of the authors of the paper.

The work was described in an article published on the preprint server bioRxiv on Thursday morning and submitted to the journal Science for review.

“What I want to know now is how easy it is to scale production,” he said.

In the study, six ferrets were treated with the spray, which were then split in pairs and placed in three cages. Each cage also went to two ferrets who had been given a placebo spray and a ferret who had been purposely infected with SARS-CoV-2 a day or two earlier.

Ferrets are used by scientists studying the flu, severe acute respiratory syndrome, and other respiratory diseases because, like humans, they can catch viruses through their noses, although they can also infect each other through contact with feces or by scratching and biting.

“Virus replication has been completely blocked,” the authors wrote.

The protective spray sticks to cells in the nose and lungs and lasts for about 24 hours, Moscona said. “If it works that well in humans, you could sleep in bed with someone infected or be with your infected children and still be safe,” she said.

The amino acids come from a section of the spike protein in coronaviruses that rarely mutates. The scientists tested it against four different variants of the virus, including both the well-known “Wuhan” and “Italian” strains, as well as against the coronaviruses that cause SARS and respiratory syndrome in the Middle East.

In cell culture it protected completely against all strains of the pandemic virus, fairly well against SARS and partially against MERS.

The lipoprotein can be inexpensively made as a freeze-dried white powder that doesn’t need to be refrigerated, Moscona said. A doctor or pharmacist could mix the powder with sugar and water to create a nasal spray.

Other laboratories have developed antibodies and “mini-proteins” that also prevent the SARS-CoV-2 virus from entering cells. However, these are more chemically complex and may need to be stored at cold temperatures.

Moscona and Porotto have been working together on similar “fusion inhibitor” peptides for 15 years, according to a conference call. They developed some against measles, nipah, parainfluenza, and other viruses.

However, these products received little commercial interest, Porotto said, given that an effective measles vaccine already exists and the deadly Nipah virus is only occasionally found in remote areas such as Bangladesh and Malaysia.

Monoclonal antibodies to the new coronavirus have been shown to prevent and treat infections. However, they are expensive to manufacture, require refrigeration, and must be injected. Australian scientists tested a nasal spray for COVID-19 in ferrets, but it boosts the immune system and does not target the virus directly.

Since lipopeptides can be shipped as a dry powder, they could also be used in rural areas in poor countries without refrigeration, Moscona said.

Moscona, a pediatrician who usually works on parainfluenza and other viruses that infect children, said she was most interested in getting the product to poor countries that may never have access to the monoclonal antibodies and mRNA vaccines that are Americans may soon have. But she has little experience in this arena, she said.

“I’ve always been a basic researcher,” she said. “I’ve never developed drugs or brought anything to the FDA or anything like that.”

These were the details of the news A nasal spray to block the virus? Scientists could get... for this day. We hope that we have succeeded by giving you the full details and information. To follow all our news, you can subscribe to the alerts system or to one of our different systems to provide you with all that is new.