The incubation period of COVID-19 may be much longer than previously... 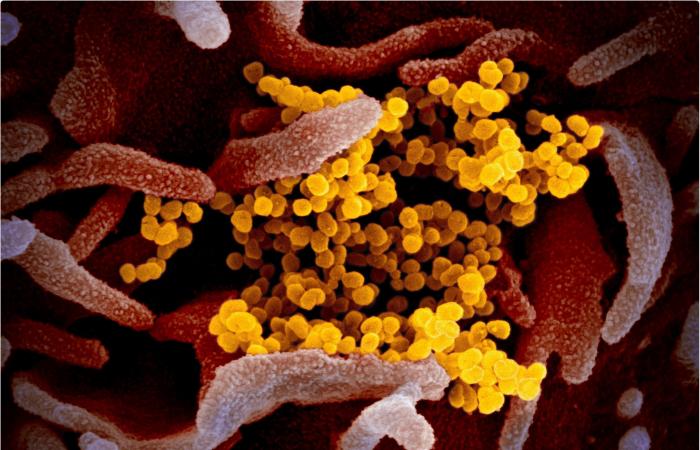 Initial estimates in the early stages of the pandemic were between 4 and 7 days.

However, since then numerous reports have appeared that estimate an incubation period of one to 34 days.

Governments are currently planning their mitigation strategies based on a maximum incubation period of 14 days.

Now Prakashini Banka and Catherine Comiskey have conducted a model study that highlights the variability over this period, including the incubation potential beyond 14 days.

An accurate estimate of the distribution of the incubation time for SARS-CoV-2 is critical to modeling the spread of the virus and the effectiveness of control measures.

Banka and Comiskey warn that detailed monitoring of self-isolation times and other protective measures is required as the incubation period may be longer than originally thought.

A pre-print version of the paper is available on the server medRxiv *while the article is being peer reviewed.


This scanning electron microscope image shows SARS-CoV-2 (yellow) – also known as 2019-nCoV, the virus that causes COVID-19 – isolated from a patient in the United States and leaking from the surface of cells (pink) that are in the US were cultivated laboratory. Image was taken and colored in at NIAID’s Rocky Mountain Laboratories (RML) in Hamilton, Montana. Image Credit: NIAID

The challenges in modeling the spread of SARS-CoV-2

Early estimates of the SARS-CoV-2 incubation period were between 4.0 and 6.4 days. Since then, several studies have estimated that the incubation times are between one and 34 days.

When an epidemic results in both symptomatic and asymptomatic infections, it becomes difficult to determine the prevalence and transmission of diseases.

“Mathematical modeling of the effective reproductive number R of an epidemic, the spread of infection, and subsequent planning and mitigation decisions depends entirely on accurate and current estimates of key modeling parameters,” the researchers say.

Given the improvements in surveillance and oversight since the first cases were identified, Banka and Comiskey have now conducted a scope review and meta-analysis of the parameters of the global incubation period of COVID-19.

The aim was to provide an updated estimate of the distribution of the incubation time that will help improve the modeling estimates of the effective reproductive number R, and hence the estimates of the prevalence of asymptomatic cases.

What did the researchers do?

A confidence interval (CI) is an estimate that indicates the range of values ​​within which the actual value could lie. Therefore, the CI helps quantify the uncertainty of an estimate when the true value is not known.

According to Banka and Comiskey, this study found that the mean incubation period can be significantly longer than previously thought.

“The results underscore the mid-term variability and potential for further incubation beyond 14 days,” they write.

It is important to keep an accurate and updated estimate

The researchers say it is important to maintain an accurate and up-to-date estimate of the SARS-CoV-2 incubation period as the virus continues to spread so that mitigation measures and advice to the general public can be properly planned.

“Equally important is that the mitigation strategies for affected communities and hospital planning requirements identified from modeling scenarios are based on reliable and accurate global estimates of incubation time,” they add.

“There is still a need for detailed monitoring of the timing of self-isolation periods and associated measures to protect communities as incubation periods may be longer,” the team concludes.

medRxiv publishes preliminary scientific reports that are not peer-reviewed and, therefore, should not be considered conclusive, guide clinical practice / health-related behavior, or be treated as established information.

These were the details of the news The incubation period of COVID-19 may be much longer than previously... for this day. We hope that we have succeeded by giving you the full details and information. To follow all our news, you can subscribe to the alerts system or to one of our different systems to provide you with all that is new.