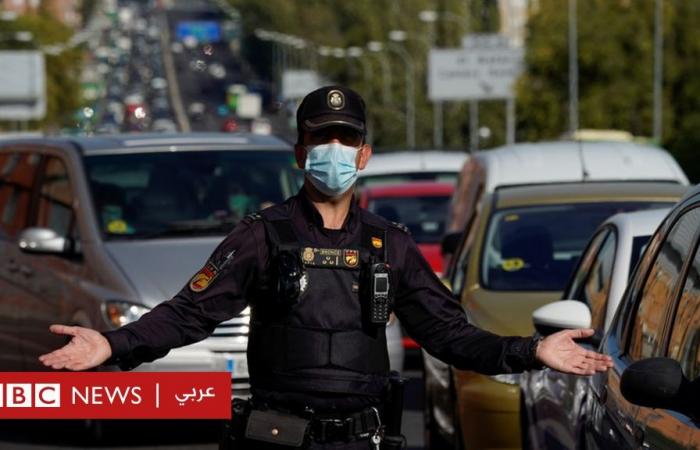 The number of confirmed new cases of Coronavirus in Europe within 24 hours exceeded one hundred thousand, in what is the largest daily death toll recorded by the continent since the start of the epidemic.

Several reactions appeared at the official level in a number of European countries, aimed at addressing the large increase in injuries.

Where the Spanish government declared a 15-day state of emergency to limit the spread of the Corona virus in the capital, Madrid, after a Spanish court overturned a decision to impose a partial lockdown on the city a week ago.

According to the decision of the state of emergency, Madrid and its neighboring cities will be subject to strict restrictions based on their application of 7,000 police forces.

France recorded the worst daily rate of new cases from the emergence of the epidemic in it, as 20 thousand cases were recorded in 24 hours

The French authorities tightened the restrictions imposed on the cities of Lyon, Lille, Grenoble and Saint-Etienne, and those cities, in addition to Paris and Marseille, were classified as high-risk areas.

In the United Kingdom, Prime Minister Boris Johnson is scheduled to make a statement next Monday, aiming to unveil more details regarding new restrictions aimed at slowing the spread of the virus.

German Chancellor Angela Merkel warned of more stringent restrictions during the next ten days if the rise in the rate of infection did not stop. There is a state of anxiety sweeping Germany after the number of new cases in the country exceeded 4,000 cases per day for the second consecutive day.

In the Netherlands, the Czech Republic, Ukraine and Poland, the number of new cases infected with the Corona virus also recorded record highs.

These were the details of the news Corona virus: Europe records more than 100 thousand new infections within... for this day. We hope that we have succeeded by giving you the full details and information. To follow all our news, you can subscribe to the alerts system or to one of our different systems to provide you with all that is new.