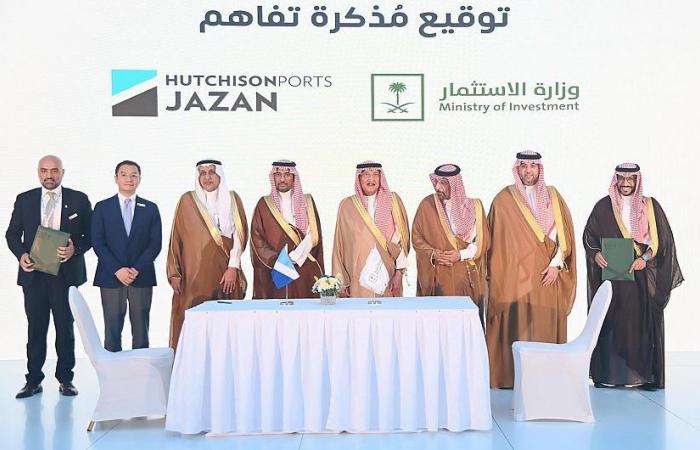 Thank you for reading the news about Saudi Jazan City holds $23bn in investment opportunities: RCJY chairman  and now with the details

Jeddah - Yasmine El Tohamy - RIYADH: The Jazan City for Basic and Transformation Industries, which is still under construction, currently holds SR88 billion ($23.4 billion) worth of investment opportunities, according to Khalid Al-Salem, chairman of the Royal Commission for Jubail and Yanbu.

While speaking at the inaugural ceremony of the Port of Jazan Primary and Downstream Industries, Al-Salem said that Jazan City is attracting qualitative investments and forging partnerships with international parties.

JPDI was inaugurated by Prince Mohammed bin Nasser bin Abdulaziz on Sept. 7, in presence of several officials, partners, as well as local and foreign investors.

Al-Salem added that the Royal Commission for Jubail and Yanbu has also signed an investment and operation agreement for the port with Hutchison Ports Co.

He noted that another agreement has been signed to establish an aluminum refinery with the Chinese company Hangzhou Jinjiang, with an estimated investment of SR4 billion.

Al-Salem added that an investment agreement has been signed to establish a factory for pasta production. A memorandum of understanding was also between the Royal Commission and Saudi Coffee Co.

“With this inauguration, we put the port of Jazan City for Basic and Transformational Industries on the map of global ports as a local, regional and global investment destination, which will contribute to attracting commercial and industrial activities in Jazan city in particular and in the southern region in general,” said Al-Salem.

During the inaugural ceremony, the Minister of Industry and Mineral Resources Bandar Al-Khorayef said that the port will contribute to developing industrial capabilities and create more investment and job opportunities for the region's people.

He revealed that his ministry is partnering with the port to launch a new logistics area that will meet the highest international standards.

“There are 187 existing and under construction factories in the Jazan region, with investments amounting to more than SR70 billion. The port will be an added value to increase logistical activity in the Kingdom and the Jazan region in particular. The Kingdom plays a major role in global supply chains due to its distinguished geographical location,” said Al-Khorayef.

Khaled Al-Falih, Minister of Investment, said that the Jazan industrial zone will contribute to creating tens of thousands of jobs.

He added that the Kingdom’s aim is to create SR1 trillion investment goals in basic and transformational industries by 2030.

“The port of Jazan City for Basic and Downstream Industries will be a center for providing modern and advanced logistical services not only to the Kingdom but also to the Middle East, because it is located on one of the most important sea transport corridors in the world, with 13 to 15 percent of global trade passing through it,” said Al-Falih.

These were the details of the news Saudi Jazan City holds $23bn in investment opportunities: RCJY chairman  for this day. We hope that we have succeeded by giving you the full details and information. To follow all our news, you can subscribe to the alerts system or to one of our different systems to provide you with all that is new.