Jeddah - Yasmine El Tohamy - RIYADH: Saudi Arabia's non-oil exports increased by 36.6 percent in April, compared to the same period last year, as the country continues to diversify its economy to achieve the goals outlined in Vision 2030, the General Authority for Statistics, also known as GASTAT, said in a report.

According to the report, Saudi Arabia's non-oil exports in April stood at SR27.4 billion ($7.3 billion), against SR20 billion in the same period last year.

In April the Kingdom’s merchandise imports grew 11.2 percent year-on-year, to SR55.3 billion, while it fell 1 percent compared to last month.

Overall merchandise exports in April increased by 98 percent to SR137 billion, up from SR69.3 billion in April 2021.

Saudi Arabia’s non-oil exports were driven by chemical and allied industries which accounted for 36.6 percent of non-oil merchandise exports, the GASTAT report stated.

The report further noted that the most imported merchandises were machinery and mechanical appliances, along with electrical equipment parts which accounted for 18.9 percent of total merchandise imports.

These were the details of the news Saudi developer Retal Urban to debut on TASI next week after $384m IPO for this day. We hope that we have succeeded by giving you the full details and information. To follow all our news, you can subscribe to the alerts system or to one of our different systems to provide you with all that is new. 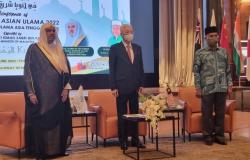