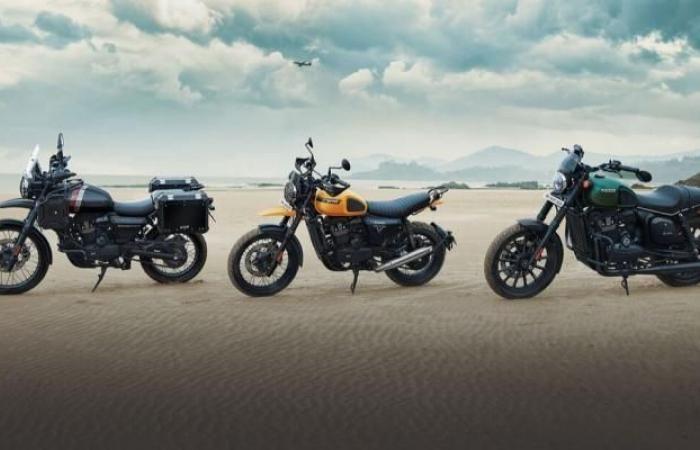 Yezdi has announced a return to the motorcycle world with three new models, the Adventure, the Scrambler and the Roadster.

The Czech company explained that all new models are based on a 334 cc single-cylinder engine with a power of 30.2 hp / 29.9 Nm of maximum torque, with a six-speed transmission.

The front wheel is steered by a telescopic fork, in the rear the Roadster and Scrambler have pulse legs, and the Adventure is equipped with a central pulse stem.

The bike features a round digital cockpit. In addition to the dark version, versions with many shiny components are also available. Both versions are shown in the primary colors green and grey. The bike is available at a starting price of 2,350 euros.

The Scrambler features 19-inch wheels at the front and 17 inches at the rear. The bike weighs 182 kg, and the bike is distinguished by its round spotlight, with a round digital cockpit.

The bike is available in one or two colors, in three different shades.

The Adventure rides on a 21-inch front wheel and 17-inch rear wheel. The new enduro weighs 188 kg, while its seat height is 815 mm.

The high windshield above the round headlight provides a great deal of protection. The cockpit is equipped with a large rectangular TFT screen. The bike is available in two different designs and two different colors, and its price starts at 2,600 euros.

When the company was forced to close, it was producing 175, Monarch, Deluxe, Road Kings and CL II. The main reason for the collapse of the company was problems at work and the increased levels of pollution standards in the company’s grades, which made them inferior to others. Especially with the advent of Yamaha and Honda in India, these bikes lost ground because the Yazdi was heavier and slower with lower fuel efficiency.

The Yezdi Roadking was a motorcycle produced in India by Ideal Jawa Ltd, Mysore from 1978 to 1996. The bike won many road races.

Ideal Jawa has sold licensed Jawa motorcycles beginning in 1960 under the Jawa brand name and from 1973 to Yazdi.

The name Yezdi was created from the phonetic transcription of the Czech verb “jezdí” (to ride a horse). The motto of the bikes sold by the company was ‘Forever Bike, Forever Value’.

Note: The content of this news was written by Al Ain News It does not express an opinion Egypt today Rather, it was transmitted with its content as it is from Al Ain News We are not responsible for the content of the news and the custody of the aforementioned source.

These were the details of the news “Yazdi” returns to the world of motorcycles with 3 models… What... for this day. We hope that we have succeeded by giving you the full details and information. To follow all our news, you can subscribe to the alerts system or to one of our different systems to provide you with all that is new.