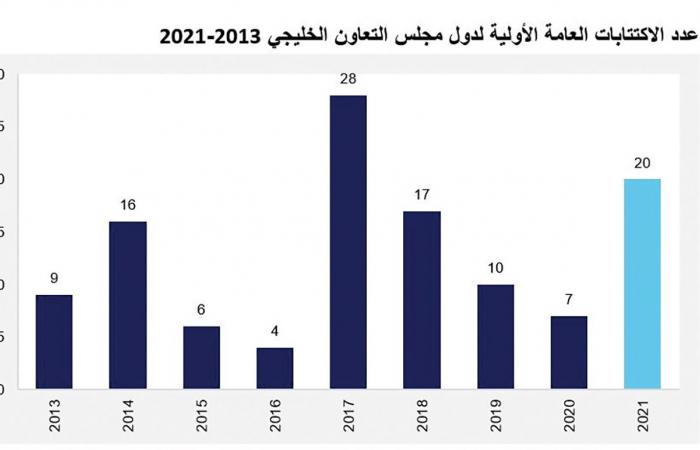 IPO issuances in the Gulf Cooperation Council (GCC) countries witnessed an outstanding performance in 2021. This was supported by secondary market valuations and improved global indicators in terms of performance and liquidity. The total number of initial public offerings (IPOs) in the GCC rose to 20 in 2021 compared to just 7 in 2020, according to Kamco Invest analytics.

The proceeds of the initial public offering activities of the Gulf entities in 2021 jumped by 4.6 times to $7.52 billion, compared to $1.64 billion in 2020, according to estimates by Bloomberg Agency and PricewaterhouseCoopers. The activity of initial public offerings in the region rebounded in line with global activity, while the performance of the secondary market and valuations contributed to strengthening the efforts of issuers to access the primary markets, as the Morgan Stanley Gulf Index rose 34.9% in 2021. In line with the approach that was characterized by the second half From 2020, the second half of 2021 saw the vast majority of releases. Regulatory authorities and government support also contributed to enhancing the activity of the primary market, as the Abu Dhabi Securities Exchange is still on the right track to achieve certain criteria for its new strategy “ADX ONE” announced at the beginning of 2021, such as doubling the market value during the next three years. Among the other factors announced are the increase in market liquidity, the launch of the financial derivatives market, the investor relations guide, and the development of a program to support research coverage of stocks, which leads to further improvement of market efficiency.

Saudi Arabia retained its leading position in terms of initial public offerings (IPOs) in the region in 2021, as 15 out of the 20 IPOs were issued in the Gulf Cooperation Council countries, either through Tadawul or the parallel market “Nomu”. The Kingdom was also at the forefront in terms of achieving the highest returns on initial public offerings, as it acquired about 62% of issuances, with a value of nearly $4.65 billion in 2021. Saudi Arabia also witnessed the largest IPO process in the region in 2021 by offering the shares of ACWA Power for subscription. year ($1.21 billion). Abu Dhabi was also among the active markets, with 3 deals valued at $2.63 billion. It saw the second largest issuance in the region for 2021 through the IPO of ADNOC Drilling (US$1.1 billion).

On the sectoral level, the consumer sector topped (4) all sectors in terms of the number of deals, with the participation of both the basic and discretionary consumer goods sectors. The technology sector (3) and the industrial sector (3) were other major sectors that witnessed public offerings, but it should be noted that most of the companies that offered their shares for subscription in the primary market had distinct product lines and business models compared to their peers. In addition to initial public offerings, Gulf companies have also taken the direct listing route.

The optimism about the launch of vaccine programs against the Covid-19 virus, the recovery of global economic activities, the liquidity resulting from financial stimulus programs, and the strong performance of stock markets contributed to strengthening the global IPO markets in 2021 to witness its best performance in 20 years, through 2,388 A $453.3 billion deal, according to data from Ernst & Young. The report revealed that the number of transactions increased by 64% year-on-year, while the proceeds from issuance jumped by 67% year-on-year.

The European, Middle East and North Eastern European stock exchanges recorded the highest growth rate, with the number of deals and returns increasing by 158% and 214%, respectively, year-on-year, according to Ernst & Young, but we expect secondary market assessments and stock market performance to be among the most prominent Considerations for companies and IPOs in 2022, as Gulf companies want to take advantage of prevailing valuations and market liquidity.

On the other hand, strong trends of initial public offerings are still being prepared by companies, and some state-owned assets may also be listed. We believe that strong trends in deals in the pipeline, stable market valuations, and support from regulators are sufficient incentives to maintain the momentum of the IPO market in the GCC in 2022, and we expect the Saudi and UAE exchanges to continue to lead the region in terms of issuance.

These were the details of the news Outstanding performance for initial public offerings in the Gulf Cooperation Council... for this day. We hope that we have succeeded by giving you the full details and information. To follow all our news, you can subscribe to the alerts system or to one of our different systems to provide you with all that is new.