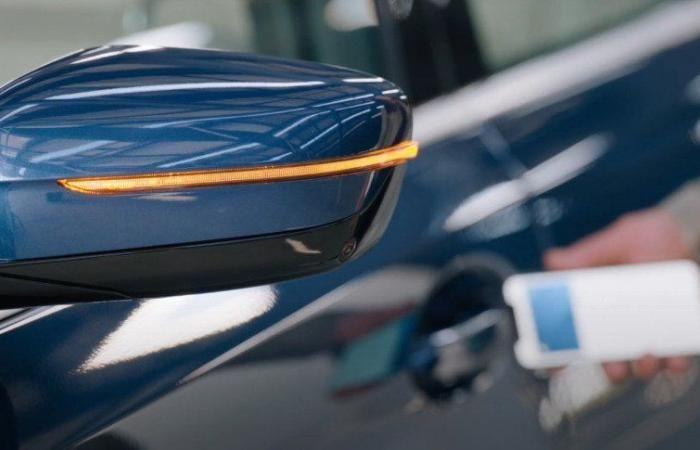 Asmaa Lamnawar wrote on Monday, January 17, 2022 07:15 pm – Reports said that the American company “Apple” will introduce its unique and smart feature, the “digital car key”, for the Korean “Hyundai” cars.

The feature known as “CarKey” allows the user to unlock and start his car from the “Wallet” application for iPhone phones.

Apple announced this feature for the first time in the middle of last year at the Worldwide Developers Conference (WWDC), which was held last June.

The company launched this feature only for some models of “B” cars. Mother. W” German.

A report by Bloomberg stated that the digital car key feature will be available for models other than “B. Mother. BMW, where there were hints from the company about making changes to the “iOS 15” update to include more other types of cars.

The report indicated that the company will start with the Korean “Hyundai” cars.

And the report said: “In line with the company’s hints several months ago about (iOS 15), we received information that the next cars that will get support for this feature will be different models from Hyundai and its flagship line (Genesis) .. We were told that the feature will be launched by next summer.” .

The report indicated that the partnership between “Apple” and “Hyundai” is complex and tense, given the general conflict between the two companies over the production of the “Apple” car about a year ago, which was stopped recently after the American company failed to find a partner to manufacture the car.

According to Forbes magazine, Apple had launched this feature in certain models of the “B. Mother. BMW, such as the BMW 5 Series, which allowed the user to open and close the car by touching the iPhone or Apple Watch door handle.

She explained that the same technology can be used to start the engine as well, in addition to the ability to share the feature with others through the “iMessage” feature, and to disable the key easily as well.

The American magazine stated that the “Power Reserve” mode can also be activated, which allows the user to open or close the car for up to 5 hours after the iPhone battery runs out of power, explaining that all the user has to do is enter the car and start it and then charge the phone battery while driving.

By activating the “Express Mode” mode, the user does not need to take the phone out of his pocket or bag, or even press a button on the smart watch to start the car.

It’s not certain which models will offer this option, but according to Forbes, it is noted that some models of the Ioniq 5 and other Hyundai vehicles include Near Field Communication (NFC) technology for a digital key.

The company is expected to announce the introduction of the new feature for Hyundai cars at the “Apple Worldwide Developers Conference” scheduled to be held next summer.

These were the details of the news Apple introduces digital car key feature for Hyundai cars for this day. We hope that we have succeeded by giving you the full details and information. To follow all our news, you can subscribe to the alerts system or to one of our different systems to provide you with all that is new.