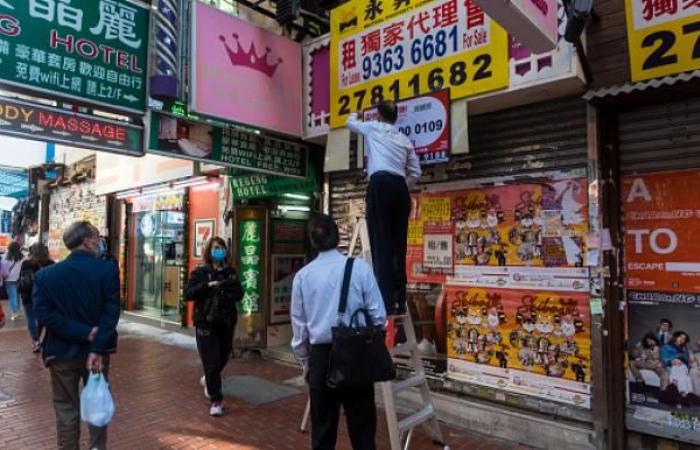 I paid off the three years of pro-democracy protests that followed COVID-19, a severe blow to retailers in Hong Kong, who have always relied on Chinese tourists from the mainland.

After Hong Kong, in the past, boasted that its shop rents were among the highest in the world, the sector has declined dramatically in the city.

But Shueng Shui, the first town to cross the main land border crossing, was quick to seize the opportunity to develop its local economy, as the town was known as a place to buy tax-free products for resale on the Chinese mainland, in a process known as parallel trading.

“People’s impressions of Shueng Shui are linked to parallel trade and the Chinese mainland,” said Eugene Chan, a 22-year-old who has lived in the area since her childhood.

Chan recalls sidewalks crowded with people filling their luggage with lotions, baby formula or household items to meet the huge demand across the border.

But all of this disappeared in the wake of the massive protests demanding democracy, which were followed by measures to close the borders against the background of the outbreak of the epidemic.

In January 2019, shortly before the outbreak of protests, the number of arrivals from the mainland reached a peak (5.5 million). Two years later, that number had fallen to less than 3,000. Note that Hong Kong has a population of about 7.5 million.

“A massive drop in demand,” said Simon Smith, senior director of research and advisory at Savills, adding that “a wave of spending from the mainland, especially those focused on luxury products, watches, jewelry and designer goods, has pushed rents to world records.”

In the past, Hong Kong’s famous shopping districts boasted of “golden streets”, with store rents more expensive than those on New York’s Fifth Avenue.

Smith said store rents in key areas underwent a “fundamental correction” and fell to 2003 levels, down more than 75 percent from peak levels recorded in 2013.
bright sides

Analysts pointed to a rebalancing in favor of local consumption, as lower-cost businesses bought some stores located in top shopping districts.

In a spacious area in central Hong Kong called “Central”, where shop rents are among the highest in the world, the luxury brand “MCM” has taken the place of the sports products chain “Decathlon”, which rented the site for 103,000 dollars a month, i.e., at a discount of 70 percent. percent, according to media reports.

In Sheung Shui, entrepreneurs such as Dream Low seized the opportunity to launch businesses more geared towards local residents, choosing to open a grocery store.

“During the tourism boom period from the mainland, 80 to 90 percent of businesses in Shueng Shui shopping district targeted parallel trade workers,” Lu said.

He added that the high rents meant that businesses destined for local residents, such as hardware stores, books and cinemas, would not be able to withstand.

The economic situation in border towns such as Shueng Shui has fueled protests since 2012 and has been an important factor in escalating tension between China and Hong Kong over the past decade.

And when the epidemic began, Lu saw a bright side, represented by a drop in rents, to open “Peuter Mart”, which focuses on “Made in Hong Kong” products, where his shop, along with a cafe and a nearby ceramics operator, represents a nascent business wave seeking to respond to local demand, stressing. “I hope that the people of Shuang Shui will be able to return to stay and spend here.”

It is still unclear whether Hong Kong’s retail economy will return to its mainland-based model or will take a new future path.

Hong Kong, which has followed in China’s footsteps in adopting a very strict policy to control COVID-19, is negotiating to resume normal but limited travel with the mainland.

Surveys reveal that many Hong Kong residents are eager to cross the border, whether for trade, tourism or to meet their families.

However, Smith pointed out that the Hong Kong government’s proposal for a daily quota that is reported to be about 1,000 people, would not have “any significant impact” on increasing tourist spending to return to pre-pandemic levels.

On the eve of the reopening of the borders, it is still not clear whether Hong Kong’s retail economy will return to its mainland-based model or will be based on a new future path.

But Chan said that closing the borders will only be a “brief pause”, expressing her fear that parallel trade will return to its former glory, but stressed that she will now focus on the present.

“Finally, one of my friends expressed a desire to come visit Shung Shui to try a restaurant. It’s a good change,” she said.

“The atmosphere is no longer stifling or confusing, on the contrary, we feel like a small community. I think everyone feels more comfortable,” she added.

These were the details of the news Hong Kong’s retail sector affected by Covid and protests for this day. We hope that we have succeeded by giving you the full details and information. To follow all our news, you can subscribe to the alerts system or to one of our different systems to provide you with all that is new.