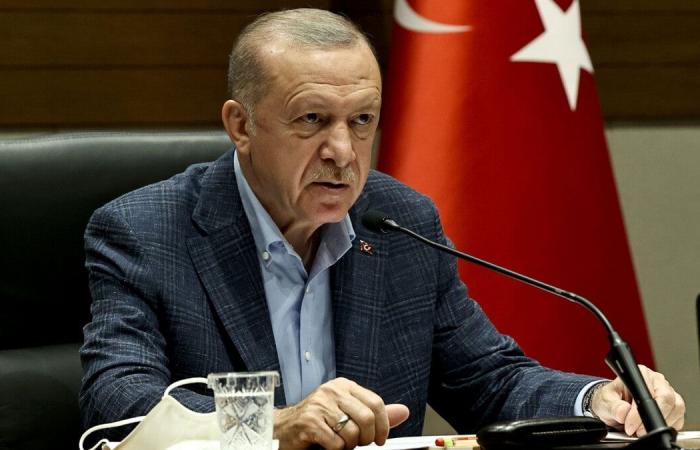 Ahead of a meeting with economists and academics, Erdogan also mentioned that the Turkish economy will enter a very different environment this summer thanks to a “new economic model” in the form of low interest rates.

On Thursday, the Turkish lira continued its rally and rose 3% to add to the big gains it recorded this week, after President Erdogan said the government and central bank would provide guarantees for some local currency deposits in exchange for foreign exchange losses.

By 06:00 GMT on Thursday, the lira recorded 11.7 against the dollar, up from the closing level last Wednesday, at 12.05, to settle after record fluctuations this week.

The lira hit an all-time low of 18.4 against the dollar last Monday before changing course and rallying after the bailout was announced.

Official data revealed that more than half of domestic deposits are in foreign exchange and gold, due to the lack of confidence in the Turkish lira after years of devaluation and the decline in the credibility of the central bank.

Erdogan took a series of steps on Monday aimed at easing the burden of the declining currency onto the treasury, urging Turks to stick to the lira rather than the dollar.

“We will provide a new financial alternative for our citizens who wish to dispel their fears caused by the high exchange rates,” he said in a press conference. From now on, there will be no need for our citizens to transfer their savings from the lira to foreign currencies, for fear of higher exchange rates.

Soon, President Erdogan’s words were unexpectedly reflected on the currency exchange market, as the Turkish lira recorded an improvement against the US dollar by nearly 30%, and reached the 11.08 mark.

The above came after the Turkish lira broke the barrier of 18 liras against the dollar, in a continuous deterioration of its value since the beginning of last September.

After the announcement of Erdogan’s plan, the Official Gazette of Turkey published a decision of the Turkish Central Bank to add the UAE dirham and the new Azerbaijani manat to the foreign exchange system in circulation, and this decision contributed to raising the number of foreign currencies in circulation with the Turkish Central Bank to 22 currencies.

These were the details of the news Turkey eliminated the exchange rate “bubble”. for this day. We hope that we have succeeded by giving you the full details and information. To follow all our news, you can subscribe to the alerts system or to one of our different systems to provide you with all that is new.