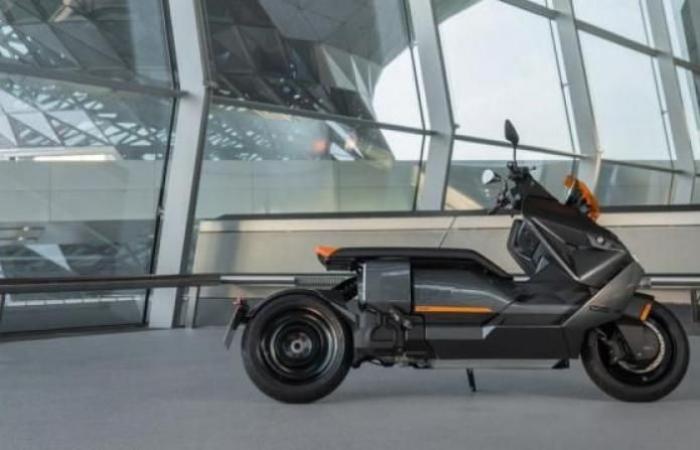 The German car manufacturer BMW has developed a new two-wheeled electric scooter, which it called “CE 04”.

The bike, which was shown in Los Angeles this week ahead of a motoring event, is expected to gain widespread acceptance in the electric scooter market.

After years of decline, motorcycle and scooter sales are booming again.

For his part, said Trudy Hardy, vice president of the company, “The electric two-wheeled vehicle could become more than just a bike with a great appearance.”

What’s interesting about owning a scooter in this category is that it will start to solve some of your transportation challenges.

This could be a great deal to own an electric scooter that is packed with features.

The German giant explained that the scooter will accommodate two people, as well as a capacity of 42 horsepower, with an amazing torque of 45 pounds.

The battery pack, which has a capacity of 8.9 kWh, aims to offer 80 miles of range and supports Level 2 charging up to 6.9 kW.

It also has anti-lock brakes and other safety features.

The company added that the bike has a large 10.25-inch TFT screen, and when paired with the BMW Motorrad app, it can track rider data step-by-step, such as the distance you have leaned in the corners, as well as information about the motorcycle.

Hardy pointed out that BMW’s strategy in manufacturing the new bike is a smart move for the company, as it will bring new people to the brand, even if they are not thinking of buying a motorcycle, because they will find a suitable solution.

Hardy expressed his concern that some people who use motorcycles or electric may not be attracted to the upgrade to the new “CE 04″ scooter, because its shape may appear to be relatively weak, but in fact the torque that makes electric cars interesting is also used in The new model.

For new and experienced riders, the CE 04 offers something new, a compact yet lively two-wheeled electric vehicle that can be the solution to city commuting.

“The new bike is part of an ongoing strategy by the company,” says Hardy. BMW has always been known for its performance and technology aspects.

We showed you, our valued visitors, the most important details about the news of “BMW” introduces a new electric bike on dot bay In this article, we hope to have provided you with all the details clearly and with more credibility and transparency. If you want to follow up on more of our news, you can subscribe to us for free through our alerts system on your browser or by joining the mailing list and we look forward to providing you with everything new.

We also have to remind you that this content is already published on the site Arab morning Perhaps the editorial team in dot bay By verifying it, modifying it, quoting from it, or it may have been completely transferred, and you can read and follow the developments of this news from its main source.

These were the details of the news BMW introduces a new electric bike for this day. We hope that we have succeeded by giving you the full details and information. To follow all our news, you can subscribe to the alerts system or to one of our different systems to provide you with all that is new.