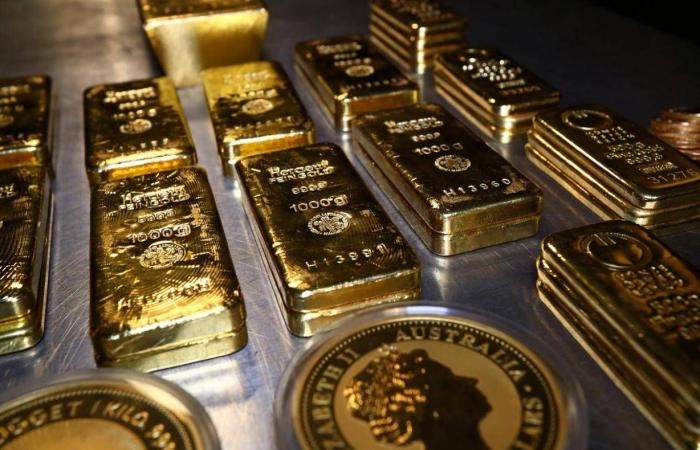 Gold prices rose yesterday, as concerns about continued high inflation supported demand for the metal, which is a safe haven, but the rise in US Treasury yields limited its gains in a narrow range.
Spot gold rose 0.2 percent to $1,785.01 an ounce by 09:31 GMT yesterday. US gold futures rose 0.1 percent to $1,786.70.
“The rise in yields is clearly negative for gold, but at the same time there are increasing inflationary pressures with the rise in crude oil prices, which in turn raised the demand for gold,” said Foad Razakzadeh, analyst at Think Markets.
Yields on benchmark 10-year US bonds hit a five-month high, according to “Reuters”.
Two US Federal Reserve officials said yesterday that the central bank should start cutting its stimulus measures, but it was too early to raise interest rates.
Gold is a hedge in the face of inflation, but reducing stimulus and raising interest rates pushes government bond yields to rise, which increases the opportunity cost of holding the yellow metal, which does not generate returns.
At the same time, the dollar index was stable after touching its lowest level in three weeks earlier in the session, which supported the attractiveness of gold to holders of other currencies.
For other precious metals, silver fell 0.3 percent, to $ 24.19 an ounce, platinum fell 0.2 percent to $ 1048.26, and palladium fell 0.4 percent to $ 2062.93.
In addition, the Australian and New Zealand dollars retreated from high levels recorded yesterday, and the dollar fell against the yen yesterday, in what analysts said was profit-taking after a strong rise.
The US dollar index settled at the close of trading yesterday, at 93.642 points, by 07:40 GMT, according to “Reuters”.
The dollar fell 0.2 percent against the Japanese yen to 114.065 yen, after falling from 114,695 yen to the dollar, which was recorded on Wednesday, and was the weakest level for the yen in four years.
The yen also exceeded its recent losses against the Australian dollar, which rose in the past few weeks against the yen and reached its highest level since 2018 last night before retreating.
Jeremy Stretch, director of cryptocurrency, said: Which. with me. CNN’s Weakness in Asian stocks and declining risk appetite may have contributed to the decline.
And at 07:47 GMT, the Australian dollar was down 0.3 percent, against its American counterpart at 0.7491 dollars, compared to 0.75465 the night before last.
The New Zealand dollar also fell 0.3 percent, while the British pound fell only 0.1 percent against the dollar to 1.3808 dollars, supported by expectations that the Bank of England will raise interest rates.
The euro was also down 0.1 percent to 1.16395 dollars, and remained close to the three-week high recorded on Tuesday at 1.1670 dollars.
In terms of cryptocurrencies, Bitcoin fell about 1.3 percent to $65,129, and it had recorded a new peak yesterday, at $67,016.50.
The cryptocurrency Ether also recorded a new high of $4,243 at around 01:35 GMT yesterday.

These were the details of the news Rising US Treasury yields keep gold gains in a narrow range for this day. We hope that we have succeeded by giving you the full details and information. To follow all our news, you can subscribe to the alerts system or to one of our different systems to provide you with all that is new.