Production of the green NEOM project will start in 2026 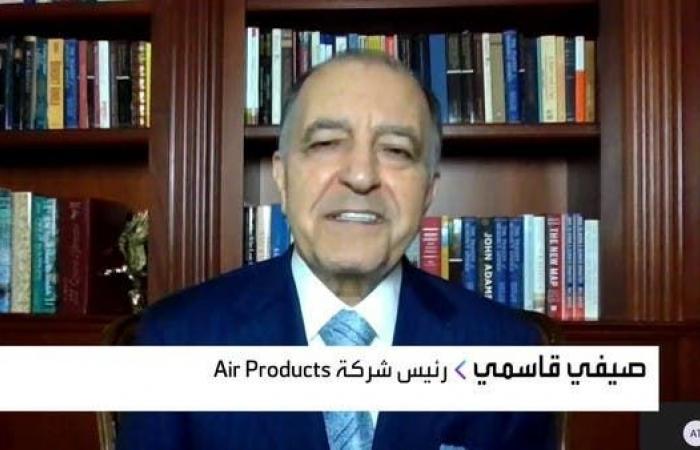 And Air Products announced, in the middle of last year, in conjunction with ACWA Power and Neom, Signing an agreement to establish an ammonia production facility, Depends on hydrogen at a global level of $5 billion powered by renewable energy.

Speaking to Al Arabiya, he added that the project the world is talking about, which is the ammonia plant produced from green hydrogen in the city of Neom, is worth $5 billion.

He pointed out that this is not his company’s first experience with water electrolysis plants, “but it is our first project of this size. With the help of the Saudi government, NEOM and our friends in ACWA Power, we decided to build the largest green hydrogen plant in the world.”

He stressed that the project is a green hydrogen plant and not ammonia. Ammonia is only a means of transporting and exporting hydrogen to global markets.

He stated that the factory will start operating in 2026.

He continued, “Today we have more than 500 people working on the design and engineering plans for the project. In parallel with this, preparatory work has also begun on the site. The company was established and is moving forward with the project. We are very proud of the extent of support and cooperation that we have received from the Saudi government and NEOM. We are confident of We will prove to the world that man is capable of solving the world’s energy problems today. We have the necessary technologies.”

He stated that the main element in the success of clean hydrogen is for governments to motivate and support consumers, for land freight companies to convert their trucks to work on hydrogen, and for steel manufacturers to convert metal smelting plants to hydrogen. Whereas subsidizing producers will not solve the problem in my opinion, but subsidizing consumers will create demand, which in turn will motivate businesses to secure supplies and production.

He pointed out that he does not expect passenger cars to be a major source of hydrogen consumption, because electric cars are more efficient, “but we expect that hydrogen will be used to remove carbon from those sectors that are difficult to convert to electricity, such as large buses, heavy trucks, trains, ships and planes, in addition to Steel industry and chemical production.

He continued, “These are all applications that are difficult to convert to work on electricity. Therefore, the use of hydrogen will be required to move forward with the energy transition.”

Regarding the combined cycle gasification plant project, in which the company is partnering with Aramco and ACWA Power, with investments worth $12 billion, Saif Qassemi said that Aramco is constructing a giant refinery in Jizan.

And “Usually after processing crude oil, there is 6 to 7% of HFO left in the crude barrel. In the past, this heavy fuel was used to power ships in the oceans, and no one cared about that. But with the entry of the organization’s laws This fuel is no longer allowed to be used in early 2020. Therefore, what we are doing in Jizan is to use this heavy, high-sulfur fuel, by gasifying it and then removing sulfur and producing synthetic gas, which is similar to natural gas, to use this gas to operate a power plant. Electricity and the production of electrical energy as well as the disposal of materials harmful to the environment.The role of Air Products will focus on using our technologies in air separation, because the gasification process requires significant amounts of oxygen.For this reason, we will build the largest industrial gas facility in the world to supply the power station there.We will also use our technologies In the gasification process.This is of course along with our partners in ACWA Power who are experts in the production of electrical energy.For this purpose, we have established this partnership in which we contribute through our experience and our technologies and of course our investment contribution in this project. valued at $12 billion.

Regarding the industrial gases center project in Jubail Industrial City, which the company started working on last year, Qassemi said, “The added value that we bring is our experience and technologies, not only in the traditional production of hydrogen, but in the construction of a hydrogen pipeline network that will be similar to our network located on the banks of the Gulf Coast. The American company, which connects many chemical and petrochemical plants with hydrogen pipes, and in the event that there is a surplus of hydrogen in those factories, we buy those quantities through the pipeline network instead of those factories using this surplus to burn it as fuel. Which is one of the largest petrochemical complexes in the world, more efficient in its use of hydrogen.

These were the details of the news Production of the green NEOM project will start in 2026 for this day. We hope that we have succeeded by giving you the full details and information. To follow all our news, you can subscribe to the alerts system or to one of our different systems to provide you with all that is new.