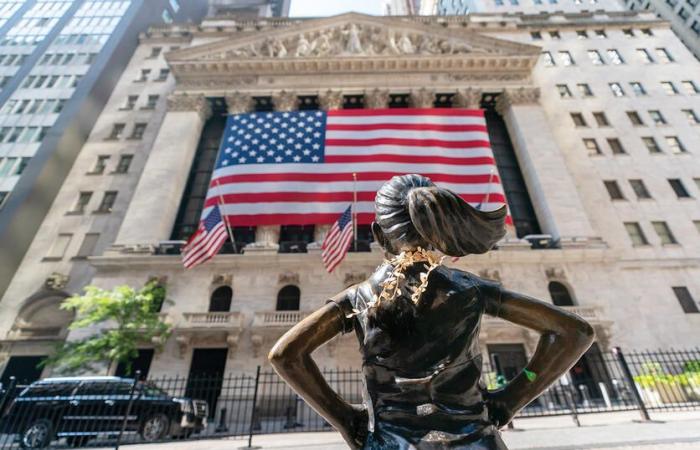 Wall Street closed sharply higher on Thursday, in a broad rally led by technology shares, as they ended a truce in the face of the US Congress over

The debt ceiling is concerned about the possibility of the government defaulting on its debts this month.

Shares of companies with large capital, including Apple, Amazon and Microsoft, jumped, and were the largest supporters of the Standard & Poor’s and Nasdaq indices.

The Senate moved a step closer to passing a $480 billion increase in the amount the Treasury Department was allowed to borrow, preventing another partisan showdown until December.

On the other hand, data showed that the number of Americans applying for unemployment benefits fell last week at the most pace in three months, indicating that the labor market recovery is regaining its momentum as the latest waves of Covid-19 began to recede.

The market is awaiting the US non-farm payrolls data, which is due to be released on Friday.

“Today’s numbers reinforce expectations that employment will make a big move in the coming months, and I think that’s positive for the economy,” said Brad Newman, director of market strategy at Alger.

“The market has crossed the wall of anxiety today, as fears of the debt ceiling impasse eased and hopes for an acceleration of employment gains were boosted,” he added.

The Nasdaq Composite Index was not less fortunate than its predecessors, as it also rose by 1.04 percent to 14653.38 points.

These were the details of the news Wall Street closes sharply higher as investors hail debt ceiling agreement... for this day. We hope that we have succeeded by giving you the full details and information. To follow all our news, you can subscribe to the alerts system or to one of our different systems to provide you with all that is new.