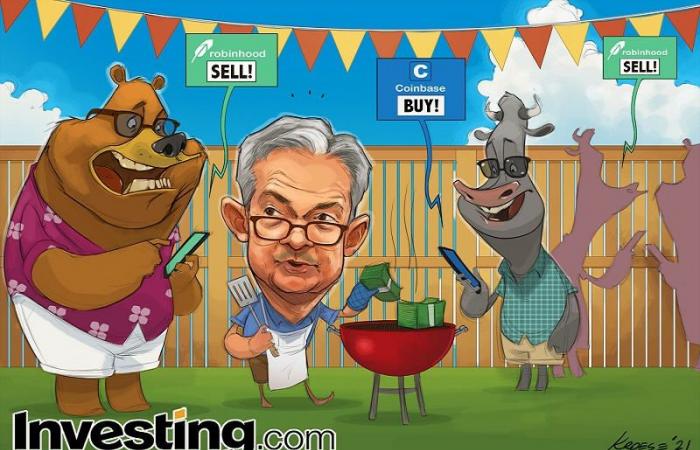 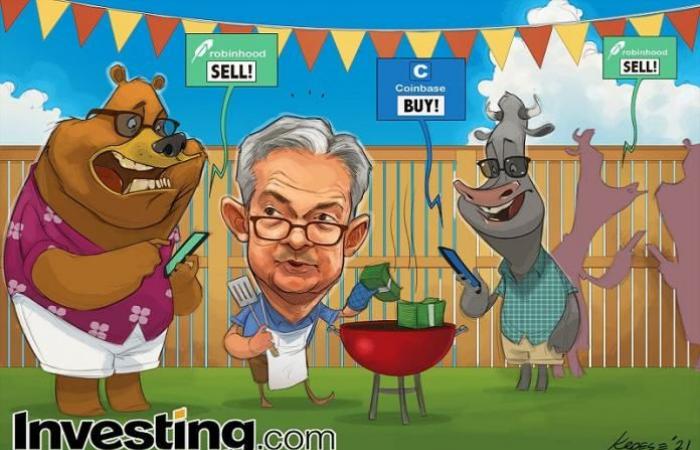 Investing.com – It appears that the recent data released in the United States has left the Federal Reserve in a real dilemma, what the Fed will do and how to confront the dilemma posed by the conflicting data and indicators.

The Fed now faces a dilemma given the data currently available, as the August CPI data supports the team’s view that higher inflation is a temporary issue by showing that the peak may have already passed.

At the same time, strong retail sales data is strengthening the pro- tapering side.

Markets will be closely watching this week’s FOMC meeting, and a tapering announcement is not expected especially after the weak August jobs report.

The Fed is now expected to keep its options open by reiterating that tapering off this year may be appropriate, acknowledging weak employment rates recently, but markets are still pricing in announcing tapering in 2021.

Bonds and the dollar

The reading reflected short and long-term yields rising to their highest levels during the trading session.

Yields on short-term bonds that move with interest rate expectations also rose, as investors bet that the Federal Reserve could cut its accommodative monetary policy at its meeting next week.

The American received support during the week, as the index ended the week’s trading, rising by 0.61% to reach 93.195 points, which affected its counterparts in the foreign exchange market.

The US consumer price index rose at a relatively moderate pace in August, indicating a easing in the pace of inflationary pressures associated with economic reopening after the easing of lockdowns, as the index reached its highest level in 13 years.

According to the Consumer Price Index data released by the Bureau of Labor Statistics last Tuesday, the index rose by 5.3% in August compared to the same period last year.

That reading came very close to the 5.4% increase recorded in July, which is the highest since 2008.

Looking at the monthly data, the pace of price growth slowed down to 0.3% compared to July, significantly lower than the 0.9% growth recorded in May-June and the 0.5% increase in the June-July period.

On the other hand, the pace of core CPI, which excludes volatile items such as food and energy, slowed down with the monthly growth rate falling to 0.1%, which is the smallest increase recorded since February. On an annual basis, core prices increased by 4% compared to 4.3% in July.

Most of the price hikes we have seen so far this year have been attributed to sectors most vulnerable to supply bottlenecks and other pandemic-related disruptions.

Although the pace of growth slowed in August, consumers are still poised for continued inflation, with expectations in the short and medium term now at their highest since 2013, according to data released by the Federal Reserve in New York on Monday.

Expectations indicate that next year, consumers expect the inflation rate to reach 5.2%, an increase of 0.3% compared to July levels, while it is the tenth consecutive monthly increase, and over three years, they expect an increase of 4%.

However, the CPI reflects the increase in some inflationary pressures in other sectors, including the residential sector.

US retail sales data published on Thursday showed sales rebounding again, as Americans bought school supplies in preparation for going back to school, in addition to spending on home décor purchases in a sign that they are ready to spend.

And the Statistics Office announced that sales rose by 0.7% in August compared to July, which is a radical difference compared to analysts’ expectations, which indicated the possibility of a decrease in sales by 0.8% after the return of the virus spread and the decline in consumer confidence due to the rise in prices.

In July, sales fell 1.8 percent compared to estimates of a 1.1 percent decline.

Increasing demand in supermarkets was one of the main factors driving the increase in August sales in addition to the improvement in sales of furniture and furnishing stores, as well as the increase in online spending.

Grocery stores also recorded notable gains, indicating continued demand for food consumed at home. On the other hand, sales of the food service sector were flat.

Consumers have also allocated some of their expenditures towards some buying experiences that are not reflected in retail sales data, by spending more on travel, accommodation, concert tickets and sporting events in light of the easing of many restrictions imposed to contain the pandemic.

Data out of the UK showed retail sales unexpectedly contracted for the fourth consecutive month in August, raising concerns about the country’s economic recovery after the pandemic.

This reading comes after the sharp contraction witnessed in July, defying economists’ expectations, which indicated a possibility of recording a growth of 0.5%.

This data casts a thick shadow of doubt over whether the BoE’s Monetary Policy Committee will be in a position to raise rates in February at the earliest.

However, Jonathan Athow, chief statistician at the Office for National Statistics, said the data indicated that “decreased food store sales are linked to increased eating out after restrictions were lifted.”

However, supply chain disruptions seem to be one of the main reasons for the decline, with about 7% of retailers reporting that they were unable to secure the materials, goods and services they needed in August.

Food store sales fell 1.2% in August, showing some indications of an increase in consumer social spending, such as eating out at restaurants rather than home cooking.

On the other hand, sales of non-food stores decreased by 1%, due to the decline in sales of supermarkets compared to other stores such as sports equipment and computer outlets.

On the other hand, car fuel sales increased by 1.5% in light of the increasing demand for travel.

Earlier in the week, data showed UK inflation rose in one month at the fastest pace not seen since the Bank of England gained independence to set interest rates, as inflation rose 1.2% to 3.2% from July to August, which This is the highest level recorded since 2012.

The unexpected rise appears to undermine the BoE’s view that the rate hike is temporary and manageable.

With CPI rising more than 1% above the BoE’s 2% target, BoE Governor Andrew Bailey will have to write a letter to the Chancellor of the Exchequer explaining why prices are rising so quickly and what the central bank intends to do to bring inflation back to target.

During August, prices for food, transportation, entertainment, furniture and restaurants rose by more than 1%. Although the BoE already expects inflation to rise to 4% by the end of the year, any acceleration would come as a shock.

Gas and electricity bills are set to rise sharply during the autumn season, which will be reflected in higher wholesale prices.

The value-added tax will rise above the current 12.5% ​​level for the hospitality sector by the end of the month, and food and clothing prices are also expected to jump in the fall.

Economists are still divided over whether inflation will be a serious problem in the coming months or will disappear after the exceptional rise in prices as the economy opens up after the Covid shock.

Reserve Bank of Australia Governor Philip Lowe said on Tuesday that lockdown measures to contain the outbreak of the pandemic will lead to a sharp contraction in the country’s economy.

He added that the reserve was confident that business activities will recover quickly once restrictions are eased in December as planned.

Lowe also confirmed that interest rates are not expected to rise from their lowest levels until 2024 due to the continued slowdown in wage growth, ruling out any expectations that the Reserve of Australia may raise interest rates in the coming period.

The Reserve of Australia revised its government bond purchases last week in response to the resurgence of the health crisis linked to the COVID-19 pandemic, which has slowed the economy.

Labor market data was also released later in the week and revealed that the unemployment rate decreased from 4.6% in July to 4.5% in August. The reading came as a shock as expectations pointed to additional job losses due to the reintroduction of precautionary measures in Sydney.

These were the details of the news A very hot week, everyone is waiting By Investing.com for this day. We hope that we have succeeded by giving you the full details and information. To follow all our news, you can subscribe to the alerts system or to one of our different systems to provide you with all that is new.