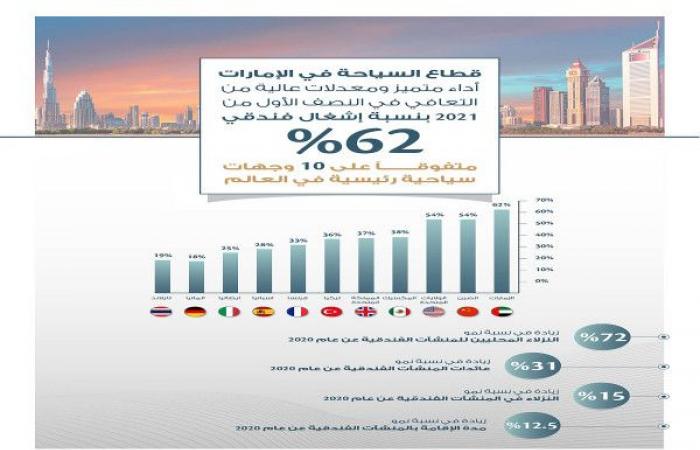 – Al Falasi: The positive results reflect the development of the UAE tourism market and the success of the national tourism product as a preferred option for the country’s residents and foreign tourists.

– The state’s initiatives during the last phase contributed to enhancing its attractiveness as a preferred and sustainable destination and increasing the number of tourists and guests in hotel establishments.

– The next stage is likely to grow in hotel occupancy in light of hosting Expo 2020 Dubai and receiving world delegations from more than 192 countries.

– 72% growth in the number of local guests in the country’s hotels during the same comparison period, bringing the share of domestic tourism to 30% of the total guests.

ABU DHABI, 19 September / WAM / During the first half of this year 2021, the tourism sector in the UAE achieved tourist occupancy rates in hotel and tourism establishments that reached 62%, outperforming the main tourist destinations in the world, where this percentage was higher than its counterparts in the top 10 International tourist destinations, such as China, which achieved an average of 54%, the United States of America (45%), Mexico (38%), the United Kingdom (37%), and Turkey (36%).

During the same comparison period, the number of hotel nights spent by guests amounted to about 35 million nights, a growth of 30%, and the average guest stay increased to 4.1 nights, with a growth of 12.5%. This was accompanied by a 31% growth in hotel establishments’ revenues, to reach 11.3 billion dirhams. The share of domestic tourism reached more than 30% of the total guests of hotel establishments.

His Excellency Dr. Ahmed Belhoul Al Falasi, Minister of State for Entrepreneurship and Small and Medium Enterprises, and Chairman of the Emirates Tourism Council, stressed that the positive results achieved by the tourism sector during the first half of this year come as a translation of the vision and directives of the wise leadership on the importance of the tourism sector as a major source of the economy, and reflect its strength and resilience. The national tourism sector, the development of the UAE tourism market and the diversity of its products, the efficiency of national campaigns to shed light on the tourism components that characterize the country, the unique and diverse destinations in which the seven emirates of the country abound, the development of hotel facilities and the excellence of hospitality services, noting that this new achievement represents the result of concerted efforts The government concerned with developing domestic tourism to attract larger numbers of domestic and foreign tourists.

His Excellency pointed out that these results are increasingly important in light of the tightening of travel in some major tourist markets in the world due to the effects of the Corona pandemic, as it reflects the high confidence in the national tourism product, and its success in establishing its position as a preferred option for the country’s residents, both citizens and residents, compared to in foreign tourist destinations.

He explained that the qualitative development witnessed by the domestic tourism system, and the growing demand for tourist destinations and hotel facilities in the country, come to confirm the effectiveness of government initiatives to stimulate domestic tourism.

His Excellency stressed the UAE’s continued efforts to consolidate its leading position on the global tourism map, and to complete the growth process in international indicators for tourism and hotel services, noting that the growth of tourism in the country confirms the growing global confidence in the preventive measures taken to ensure the health and safety of hotel guests and visitors to tourist destinations. His Excellency also stressed that the high levels of vaccination in the country, which reached 80%, which is one of the highest rates in the world, contributed to raising the percentage of safety and confidence in the tourism sector in the country.

His Excellency explained that the authorities concerned with tourism development in the country continue their joint efforts and coordination to increase the growth of Emirati tourism during the next phase through qualitative projects and initiatives, including preparing for the internal tourism campaign during the next session, and launching external tourism promotional campaigns with the aim of opening new markets to attract tourists to the country, pointing out To the importance of hosting the global event Expo 2020 Dubai in October and receiving world delegations from more than 192 countries, which will give a great boost to the tourism sector in the country and will make leaps in the hotel sector growth indicators, hotel occupancy rates and tourism activity in general.

Haitham Matar, President of InterContinental Hotels and Resorts Group for India, Middle East and Africa, explained that thanks to the support of the UAE government and the clear vision it adopts in developing the tourism sector and enhancing its leadership, competitiveness and sustainability, the sector achieved remarkable growth and recovery in the past period, which is confirmed by the strong performance of the group’s hotel portfolio. in the Emirates.

Matar also emphasized the distinguished role of the tourist authorities in the country and the distinctive national tourism initiatives such as the “The Most Beautiful Winter in the World” campaign, which greatly supported local tourism, which led to an increase in demand and an increase in reservations.

For his part, Mr. Mohammed Jassim Al Rayes, Executive Vice President of Al Rayes Travel and Ships Company, confirmed that in the past period, an increase in demand for tourism in the UAE was noted, as it is one of the distinguished tourist countries that possesses high-end recreational facilities and a developed tourist infrastructure. It was also noted that the demand from domestic tourism increased, which led To the competition of tourism companies to provide distinctive tourism offers aimed at promoting domestic tourism in the various emirates of the country.

These were the details of the news Emirates News Agency – The UAE achieves a hotel occupancy rate... for this day. We hope that we have succeeded by giving you the full details and information. To follow all our news, you can subscribe to the alerts system or to one of our different systems to provide you with all that is new.