In pictures… Unearthing the statue of the mysterious founder of “Bitcoin” 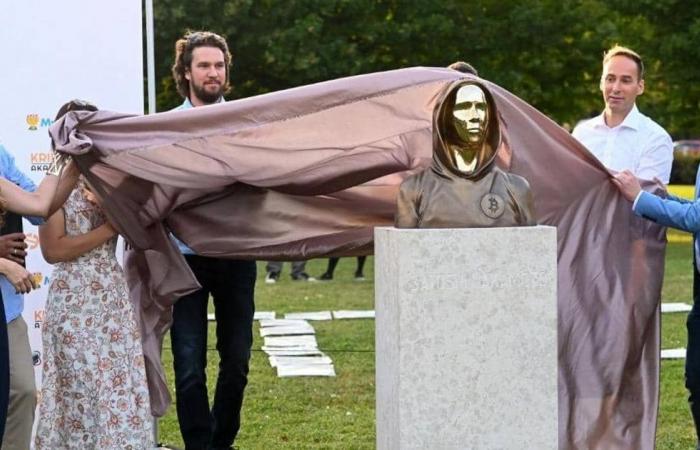 The statue was erected in the Hungarian capital Budapest It was made of bronze, and came in the form of a masked person, in reference to the pseudonym taken by its creator.Bitcoin” and he Satoshi Nakamoto.

The idea of ​​making the statue belongs to a businessman and a specialized journalist digital currencies The Hungarian Andras Gyorvi, knowing that the process of its formation and presentation was funded by four Hungarian institutions working in the field of Cryptocurrencies.

In an interview with “AFP”, Giorvi said: “Last March, I was looking for the relationship between digital art andBlockchainAnd I wondered to myself: Why doesn’t Nakamoto have a statue in Budapest?

He added, “The shape of the mysterious statue accurately reflects the identity of the founder of Bitcoin, which was succeeded by sculptors Tamas Geli and Rika Gergeli.”

For his part, Geli, who made the statue in his workshop on the outskirts of Budapest, said: “The concept of bitcoin is that the currency belongs to everyone, and the statue expresses that because we made it so that it reflects the image of the face of the person who is contemplating it, as if he says we are all Nakamoto.”

It is worth noting that Bitcoin was created in the wake of The global financial crisis In 2008, the founding statement, published on October 31 of the same year, and drafted by Nakamoto, included that the main objective of the currency is to process online payments between two parties without going through a financial institution.

These were the details of the news In pictures… Unearthing the statue of the mysterious founder of “Bitcoin” for this day. We hope that we have succeeded by giving you the full details and information. To follow all our news, you can subscribe to the alerts system or to one of our different systems to provide you with all that is new.