Inclusion of “Response Plus” in the second Abu Dhabi market platform 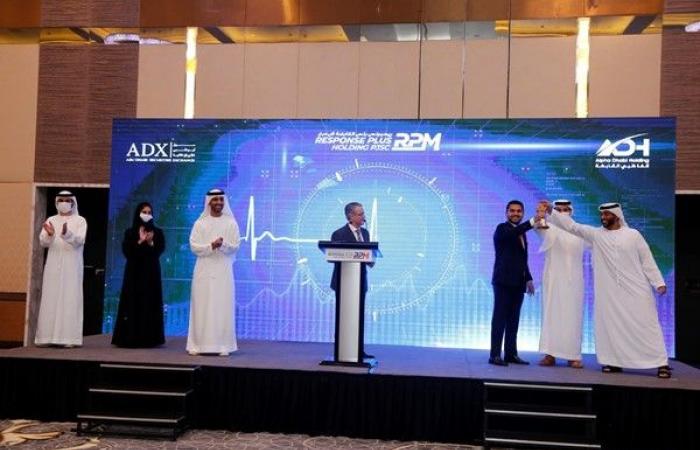 Response Plus Holding is one of the largest field healthcare providers in the UAE, with more than 1,600 employees and a paid-up capital of AED 200 million.

Founded in 2010, the company specializes in emergency medical transport operations from remote worksites, operates more than 260 medical facilities, and owns one of the largest ambulance fleets in the region, comprising more than 160 vehicles.

Response Plus Holding Company provides medical support to the oil and gas, chemical and construction sites sectors, and has operations and activities in the UAE, Saudi Arabia and Oman, and is currently implementing its expansion strategy in the GCC, Africa and India over the next five years.

Saeed Hamad Al Dhaheri, CEO of the Abu Dhabi Securities Exchange, said that the Abu Dhabi Securities Exchange (ADX) has established itself as one of the most important active financial markets, thanks to the increasing number of new listings, and significantly expanding the range of its products and services… and by connecting promising growth companies, such as Response Plus, with a strong base of regional liquidity and elite global investors, the market will undoubtedly play a prominent role in supporting economic development in the region in the coming years.

In turn, Hamad Al Ameri, Managing Director and CEO of Alpha Holdings, said: “The company is currently working on implementing a targeted five-year strategy aimed at expanding into new markets, integrating and launching additional services. After the step of listing Response Plus in the financial market, we can Sharing the promising growth path with a broader base of investors.” It is worth noting that “Response Plus” Holding Company is the thirteenth company to be listed on the second market platform of the Abu Dhabi Securities Exchange since the platform was established in 2014.
The market value of the second market, at the end of August, amounted to 38 billion dirhams, an increase of 273% compared to the same period last year.

These were the details of the news Inclusion of “Response Plus” in the second Abu Dhabi market platform for this day. We hope that we have succeeded by giving you the full details and information. To follow all our news, you can subscribe to the alerts system or to one of our different systems to provide you with all that is new.