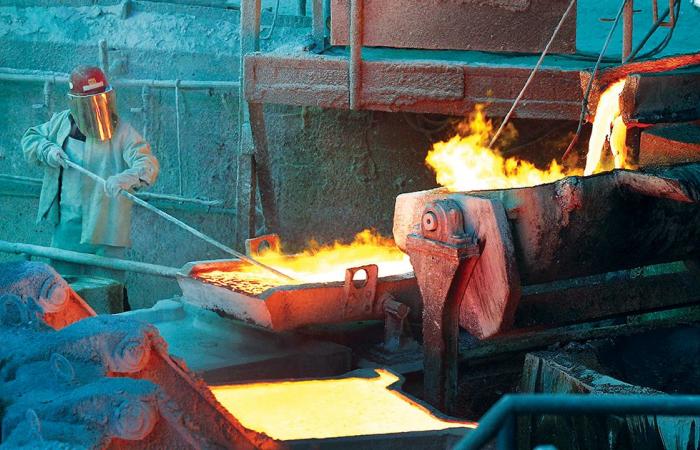 Jeddah - Yasmine El Tohamy - WASHINGTON: Global prices for raw materials are soaring thanks to a boom in demand due to the recovery from the COVID-19 downturn, coupled with logistical bottlenecks.

Copper in the past week hit a 10-year high. Bloomberg’s agriculture Commodity Price Index has climbed 22 percent so far this year to its highest level since 2016, while crude oil has risen 30 percent in the past year.

Lumber has tripled over the past 12 months, and the National Association of Homebuilders said that has added $36,000 to the cost of a new house.

Tin, used in electronic circuits, automotive components and batteries, also hit its highest level since 2011, as the price doubled in the past year. The reasons for these increases are varied.

For sugar, a shortage of shipping containers and bottlenecks at ports are pushing prices up, while corn, soybeans and wheat are also experiencing delivery problems.

For oil, global demand is accelerating with the reopening of economies following the pandemic shutdowns. The price of gasoline at the pump in the US has risen to $2.89 a gallon from $1.77 a year ago, according to the AAA, an automobile association. Bart Melek of TD Securities said the price of Brent crude “appears unstoppable” as the market is expecting demand to increase massively and stocks to be further reduced in the second half of the year. “US consumers are a major reason markets remain bullish,” Bjornar Tonhaugen of Rystad Energy said in an analysis.

The Chinese and US “locomotives” far outweigh the impact of the slowdown in India, which has been overwhelmed by a resurgence of COVID-19 infections, he said. “Dr. Copper” — so called because its widespread use means it often offers an accurate diagnosis of the global economy — has grabbed headlines this week when it topped $10,000 a ton.

The gains have been driven by strong Chinese demand as well as labor protests in Chile, impacting mines and ports. The weak US dollar also means it takes more American greenbacks to buy the same amount of metal.

The price of the red metal also benefits from a transition to clean energy technologies that use more copper, said Elijah Oliveros-Rosen of S&P Global Ratings.

“When you see strong expectations for growth, and that is driven by infrastructure and decarbonization, that is great for copper,” he told AFP.

Another factor is that investors see commodities futures contracts as an attractive alternative given the very low interest rates and modest profitability of Treasury bills, analysts say.

“There is a lot of extra money floating around in the market place,” said Michael Zuzolo of Global Commodity Analytics and Consulting.

The vagaries of the climate with drought in Latin America and the late frosts in Europe also have played a role in increasing agriculture.

Among the most spectacular, pork surged 51 percent in one year, the US Department of Agriculture said in its April report.

And big consumer product manufacturers like Procter and Gamble, Kimberly-Clark and Coca-Cola have all announced plans to raise prices.

These were the details of the news Global prices of raw materials soar high for this day. We hope that we have succeeded by giving you the full details and information. To follow all our news, you can subscribe to the alerts system or to one of our different systems to provide you with all that is new.