Foreign funds have billions at stake in Turkish market volatility 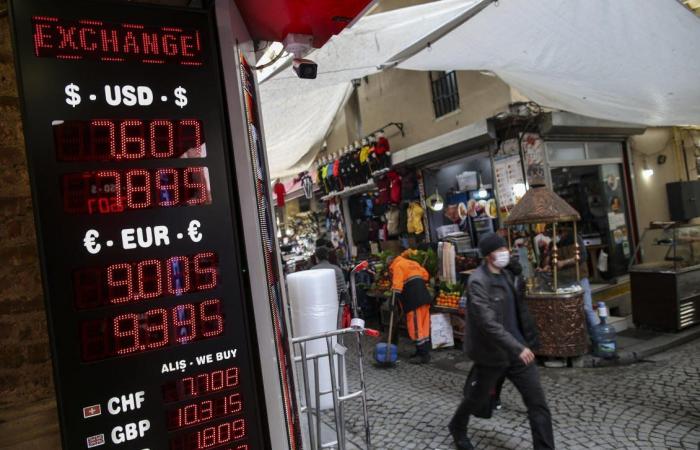 Jeddah - Yasmine El Tohamy - LONDON: Foreign funds have reported about $3.4 billion in Turkish stock and sovereign dollar bond holdings so far this year, much of which could be loss-making after the sudden firing of central bank governor Naci Agbal rocked local markets.
Agbal was ousted by President Tayyip Erdogan at the weekend and replaced by Sahap Kavcioglu, a former lawmaker who appears to share Erdogan’s view that high interest rates cause inflation.
“Investor confidence in Turkey is completely shot to pieces,” said Jason Tuvey, senior emerging markets economist at Capital Economics. “So long as Erdogan is there, there will be many investors that will simply no longer be willing to put their money into the country for a sustained period of time.”
The Turkish lira plunged around 10 percent after Agbal’s departure, some Turkish dollar-denominated bond prices fell to the lowest in 10 months, while Istanbul-listed shares logged their worst two days since the 2008 crisis.
Among international mutual funds, Fidelity Investments has reported one of the largest holdings in Turkish assets this year, with $552.7 million across two bond funds in its latest disclosure at the end of January, according to data provided by Morningstar.
A couple of iShares exchange traded funds (ETFs) had about $398.6 million invested in Turkish equities, disclosures on Monday showed, according to the Morningstar data.
Cambria ETFs, Sprott, HSBC, JPMorgan and Invesco have been among others to disclose holdings, mainly in ETFs, as recently as this week, the data showed. Reuters was unable to verify whether those investments were made before or after Agbal’s exit.
Legal & General, BlueBay Asset Management, Union Investment, Arca Fondi, Vanguard and Schroders have also disclosed significant holdings of Turkish assets this year.
“We have not altered our position (on Turkish debt) as we are waiting to assess whether there will be a broader material change in monetary policy stance in Turkey,” said Sergey Dergachev, senior portfolio manager at Union Investment.
Fidelity declined to comment. The other funds didn’t respond to requests for comment.
Agbal, the fourth governor in five years, had soothed some investor concerns about Erdogan’s perceived meddling in monetary policy and his repeated calls to cut interest rates. Between November and his sacking, the lira rallied around 16 percent.
Many funds were likely lured into increasing their exposure to Turkish assets by the appointment of Agbal, who in subsequent months lifted the policy rate by 875 basis points to 19 percent, the largest increase of any big economy.
In recent weeks, Turkey along with most emerging markets, suffered as bond yields raced up in the United States and other advanced economies and the dollar surged.
So while Turkey-dedicated equity funds had sucked in $245 million so far this year up to March 17, EPFR data show bond funds saw an exodus of $977.6 million over the same period.

These were the details of the news Foreign funds have billions at stake in Turkish market volatility for this day. We hope that we have succeeded by giving you the full details and information. To follow all our news, you can subscribe to the alerts system or to one of our different systems to provide you with all that is new.