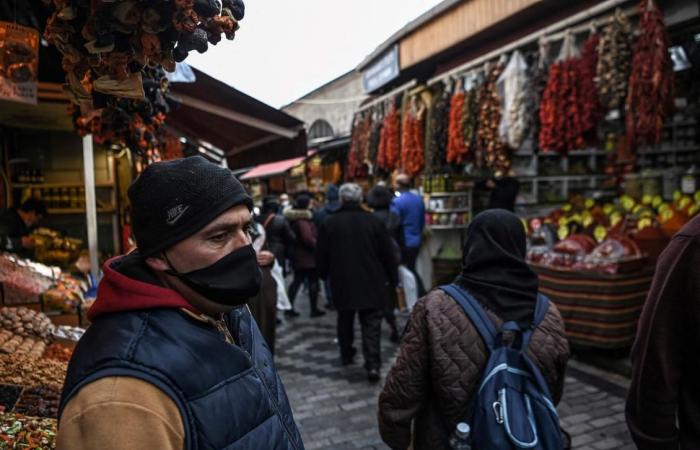 Jeddah - Yasmine El Tohamy - ISTANBUL: Turkish markets whip-sawed on Tuesday and offshore lira rates sky-rocketed as investors, banks and locals sought to predict whether President Tayyip Erdogan had reset the economy on an easy-month path after the weekend’s abrupt leadership overhaul.
The currency plunged as much as 15 percent on Monday after Erdogan abruptly fired a hawkish central bank governor and installed a critic of the country’s tight monetary stance, including its 19 percent interest rate.
Opposition politicians seized on what they called a dangerous and baffling move by the president to oust a bank governor, Naci Agbal, who had gained market credibility as an inflation-fighter in less than five months on the job.
Sahap Kavcioglu, Turkey’s fourth central bank chief in two years, held another call with bank executives on Tuesday to seek to ease nerves and clear up days of confusion over pricing. He held his first call on Sunday.
While the lira stabilized at just under 8 to the dollar, the offshore rate rose to its highest in at least a decade at 1,400 percent, Refinitiv data showed, as foreign investors scrambled to clear positions.
The sharp move echoed a jump to nearly as high two years ago when Turkey’s state banks withheld lira liquidity from the London market, days before nationwide municipal elections.
Traders said it was unlikely that state banks were behind the latest move, which drove up costs of hedging and shorting lira bets. Rates later eased to 500 percent.
Amundi, Europe’s largest asset manager with 1.7 trillion euro ($2 trillion), said a 300-point rate cut to a 16 percent “would not be surprising” at a policy meeting on April 15.
“Constant changes of the economic team does not bode well for policy credibility,” said Yerlan Syzdykov, Amundi’s global head of emerging markets.
“Erdogan is showing impatience in his desire for quick economic turnaround.”
Agbal’s monetary orthodoxy — including a rate hike two days before he was fired — made him an investor darling even as it irked some in Erdogan’s ruling AK Party (AKP) who said the economy needed stimulus as it emerged from coronavirus fallout.
But inflation has risen to near 16 percent and the lira has shed half its value in less than three years, raising import prices.
“This is the first time that I’ve seen the dollar and euro this unstable,” said Sedat Temel, 37, a tourism sector worker in Istanbul. “There is no trust here in this country. The central bank governor removal adds to the lack of trust.”
In his Sunday call with bank CEOs, Kavcioglu, an ex-banker, said policy would not change any time soon and depend on inflation. But one banker said executives were unconvinced, and lenders have since hesitated to price loans.
Ratings agencies said risks were elevated around Turkey since Kavcioglu, a former AKP lawmaker, has espoused the unorthodox view shared by Erdogan — that high interest rates cause inflation.
“The ridiculous steps you take, the unqualified people you appoint are not enough,” opposition Iyi Party chairwoman Meral Aksener said in parliament. “We are on the verge of a balance of payment crisis.”
Commerzbank predicted the lira would touch 10 by year end and said “the next lira crisis is upon us.”
Morgan Stanley said some $2.4 billion in sales by foreigners were needed to bring last week’s bullish market position back to neutral.

These were the details of the news Confusion grips Turkish markets after central bank overhaul for this day. We hope that we have succeeded by giving you the full details and information. To follow all our news, you can subscribe to the alerts system or to one of our different systems to provide you with all that is new.